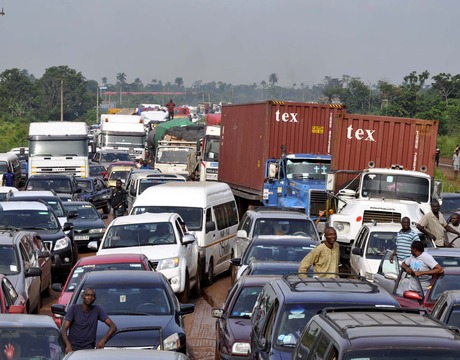 Gridlock on a Federal Highway

The body remained by the roadside after an armed robbery, but Tunmise Oladapo-Kuku was ready to help as drivers manoeuvred their way through this African megacity’s notorious traffic.

Smooth-voiced Oladapo-Kuku, from behind her microphone at Lagos Traffic Radio 96.1 FM, began alerting officials of the situation in the largest city in Africa’s most populous nation.

“Armed robbers have just shot a man dead in Gbagada. His body is lying by the roadside. In Ikorodu roundabout and Owode Onirin bus stop, traffic is building up. Concerned officials, please go and clear them of traffic,” she said.

Many radio stations across the world update their listeners with traffic reports, particularly during peak hours. But Lagos, as any longtime resident would be happy to explain, is not quite like many cities.

Officials in Nigeria’s economic capital, with a population estimated around 15 million, spotty public transport and roads with potholes the size of small ponds, have decided such a limited service simply will not do.

They have launched a radio station devoted solely to traffic, taking calls from throughout the city from drivers as well as designated monitors, and then relaying those reports and suggestions to listeners.

The government in Lagos state, where the city is located, has made easing monstrous traffic jams one of its priorities, so far with varying success, and the radio station is among its latest moves.

It is difficult to overstate the problem. The millions of Lagos residents who must commute across town or into the suburbs face hours-long drives over often dangerous roads while dodging tankers and swarming motorcycle taxis.

So the radio station operating 18 hours a day, with songs played intermittently between traffic reports, has been a welcome addition since coming on stream in late May.

Its usefulness could be seen recently when a petrol tanker ran into a ditch on the outskirts of Lagos, turning what would have normally been an awful traffic jam into something far worse.

A monitor had phoned in to report the crash, and presenter Femi Akanni began broadcasting alternative routes to escape the gridlock.

“Motorists should please use alternative routes in the meantime to get to their destinations,” he said.

Another part of the radio station’s duties has been to explain — in both English and the local Yoruba language — a set of controversial new traffic laws, including bans on mobile phone use and even smoking or eating while driving.

Previously such attempts at crackdowns — including bids to ban nuisance motorcycle taxis in parts of the city — have resulted in an initial burst of selective enforcement before quickly being forgotten.

“The radio is one of our initiatives to make life better for Lagosians … to solve traffic problems as a city aspiring to become Africa’s model megacity,” Lagos Information Commissioner Lateef Aderemi Ibirogba told AFP.

The radio is carving a niche for itself, gradually making itself known to Lagosians, even if reception remains poor in some areas, which has drawn complaints.

“The radio is a creative solution to the traffic situation in Lagos,” said a University of Lagos lecturer in communication studies, Olubunmi Ajibade.

Others however say the money would be better spent on repairing roads — though the state government insists it is working on that problem as well.