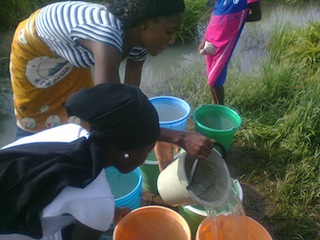 There are reports of acute water scarcity in and around Keffi, a major town in Nasarawa State, North-central Nigeria.

The situation has persisted for several weeks it was reliably gathered.

A 200-level Theatre Arts student revealed that the scarcity of water started since resumption of second semester in July.

“It’s a pathetic situation. We buy bags of pure water to do virtually everything. That one too is now costly, the manufacturer jacked up the price to make more profit. We resort to the stream which is mostly crowded. It is that bad.”

Another student who was on her way to a remote stream said “We heard the rain damaged a major pipe. The borehole that used to serve the whole community around campus is damaged. To most of us it appears the government doesn’t care. We don’t blame them; their children are living in good condition while their relatives don’t experience such. This is unfair, very unfair.”