Achebe out with memoir on Biafra 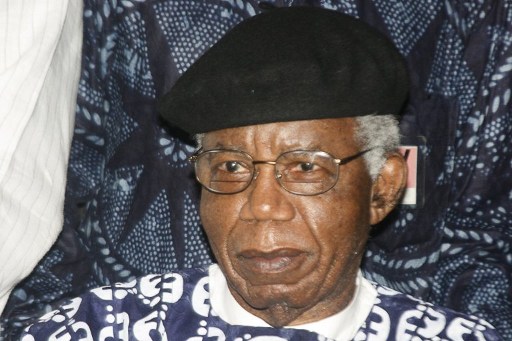 Nigeria’s Chinua Achebe, often called the father of modern African literature, released his first major work in years Thursday with a long-awaited memoir centred on the war that nearly destroyed his nation.

“There Was A Country: A Personal History of Biafra” chronicles Achebe’s experiences during Nigeria’s 1967-1970 civil war, which saw his native eastern region, dominated by the Igbo ethnic group, secede as the Republic of Biafra.

The split came largely in response to massacres of Igbos in Nigeria’s north and saw Achebe, author of the revered novel “Things Fall Apart,” speak out forcefully in support of the move.

His memoir was released in Britain on Thursday and will be available in Nigeria shortly after, said publishers Allen Lane, a division of Penguin. Its release in the United States is set for October 11.

The tensions that ignited the Biafran conflict, which left around one million people dead, including many from starvation, are largely settled. Today, sporadic calls for greater Igbo autonomy have limited impact in Nigerian politics.

Experts, however, say a Biafra memoir from the 81-year-old Achebe is urgently needed in a country that remains deeply fractured on other levels, despie the book’s focus on events that happened more than four decades ago.

“Achebe is sustaining the debate on integration, on unity and on oneness,” said Dapo Thomas, a history professor at Lagos State University.

“Until there is a sovereign agreement from the peasants to the elite that we want to remain as one, we must continue that debate. A nation cannot remain comatose while these issues are unresolved.”

Nigeria, Africa’s most populous country with 160 million people, groups around 250 ethnic groups and is roughly divided between a mainly Muslim north and predominately Christian south.

Though speculation persists over whether the country will eventually break up, many say such predictions are overblown.

Yet fault lines remain, notably between the north and south, a division that has had immeasurable impact on Nigeria since independence in 1960.

Religiously and ethnically divided communities in the so-called “Middle Belt” in the country’s centre have seen waves of clashes that have killed thousands in recent years.

Beyond that, Islamist group Boko Haram is blamed for killing more than 1,400 people since 2010 in an insurgency which it says is aimed at restoring an Islamic state in the north and stripping power from the secular government.

During the Biafra war, “what we are finding is a new nation going through the pangs of nationhood,” said the writer and literature professor A. E. Eruvbetine.

“The truth is, in Nigeria here we are still going through the trauma of trying to forge a nation.”

Achebe strongly backed his native Biafra in the civil war and even toured to speak on its behalf. Echoes of the conflict emerge in his writing, including his collection “Christmas in Biafra and Other Poems.”

The octogenarian remains a towering figure in Nigerian and African literature, though he has been based in the United States in recent years where he has been a professor at Brown University in Rhode Island. He travels infrequently due to a 1990 car accident that left him in a wheelchair.

Achebe’s novel “Things Fall Apart”, about the collision between British colonial rule and Igbo society, remains a landmark work 54 years after its release.

“Just as we read Shakespeare, it’s not possible for any student in this department to graduate without reading the works of Chinua Achebe,” said the head of the English department at the University of Lagos, Adeyemi Daramola.

“The trouble with Nigeria is simply and squarely a failure of leadership,” it reads.

Achebe has limited such commentary in recent years, unlike his great Nigerian literary rival Wole Soyinka, the first African to win the Nobel prize for literature, who has stayed on the political front line throughout his career.

However, during January protests over a fuel price hike, Achebe issued “A Statement of Solidarity with the Nigerian People” that gained attention back home.

His legacy is secure in Nigeria but his absence has been felt, said Daramola.

“For Achebe to have been away for so long, we have indeed missed him.”