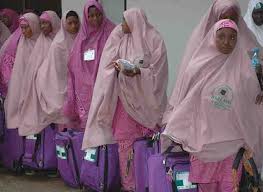 The Saudi authorities have stepped up the deportation of unaccompanied Nigerian female pilgrims, sending back to Nigeria 508 of them Thursday night.

A man was also among the deportees. He was said to have decided to return home after the Saudis also denied entry to his wife, according to Alhaji Uba Mana, spokesman of the Hajj Commission.

Close to 1,000 female pilgrims, who landed in Saudi without male companions, have so far been sent back to Nigeria, prompting Nigeria’s National Hajj Commission announce the suspension of flights to Saudi Arabia.

Last night, the Hajj commission described the development as “”unprecedented and worrisome”.

“After consultation with all stakeholders, the National Hajj Commission of Nigeria has been compelled to temporarily suspend all Hajj flights for the next 48 hours,” the commission said in a statement.

The suspension of all flights would enable the commission to “appraise the situation critically”, it said.

An airport official in Jeddah said the women have been denied entry because “they are not accompanied by a mahram (the statutory male companion),” adding that talks were continuing between Saudi and Nigerian officials.

The women began arriving at Jeddah airport on Sunday.

About 171 of them flew home to Nigeria on Wednesday. Another batch of 102 returned to the country on Thursday, airport officials said.

Nigerian President Goodluck Jonathan on Wednesday set up a five-member team to negotiate with the Saudi authorities, an official statement said.

Nigerian and Saudi officials held a “fruitful meeting” Thursday in Abuja on the issue, the leader of the Nigerian team to the talks, Aminu Tambuwal, told reporters.

Tambuwal, speaker of the lower house of parliament, did not give further details.