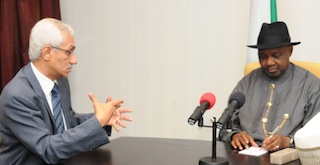 The Federal Government on Wednesday gave the government of Saudi Arabia 24 hours ultimatum of to resolve issues concerning their refusal to allow unaccompanied female Nigerian pilgrims into the country.

Nigeria’s Vice President Namadi Sambo gave the ultimatum to the Saudi Arabian Ambassador to Nigeria, Mr Khaled Abdurabuh, who he summoned to his office.

Sambo requested the Ambassador to communicate the outcome of his efforts to him within 24 hours.

Saudi Arabia had detained about 1000 female pilgrims who arrived in its two cities of Jeddah and Medinah since Sunday over allegations that they were not accompanied by male companions or Muharram.

One hundred and seventy one of the intending pilgrims were sent back to Kano last night.

But the Vice President at the meeting with the Saudi Arabia Ambassador regretted that only Nigerian pilgrims were being subjected to such dehumanising treatment.

He subsequently asked the Saudi Arabian authorities to be cautious and flexible over the issue to enable the pilgrims undertake their sacred religious duties. Sambo also said Nigerian government will not allow its citizens to be unduly maltreated.

Abdurabuh however said the rule that female pilgrims should be accompanied by a male companion is not a new one, though it was not been enforced before. He also said the stipulation applies to female pilgrims from all countries and not those from Nigeria alone.

But the Ambassador revealed that the Ministries of Hajj, Foreign Affairs and Interior and the Governor of Mecca were meeting in Riyadh, the country’s capital to come up with a solution to the issue.

He expressed the hope that the issue would be resolved within 24 hours.