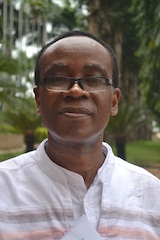 Nigeria’s human rights and environmental campaigner, Nnimoh Bassey has won this year’s Norwegian Rafto Prize in recognition of his long-term fight for people’s right to life, health, food and water in a world affected by complex and threatening climate change and mass environmental destruction.

Apart from receiving a diploma certificate, Bassey will also get a prize money of $20,000.

Bassey, 54, an architect, heads Environmental Rights Action, operating chiefly in the Niger Delta. Rafto said that Bassey has shown through his rights based work and criticism of prevailing systems how human rights can help mitigate the effects of these changes. Bassey has also been serving since 2008 as the chairman of Friends of the Earth International.

“Nnimmo Bassey links human rights to the climate by demonstrating how climate change has the greatest effect on the world’s most vulnerable people, the very people who have contributed least to the problem in the first place.

The 2012 Rafto Prize will be awarded at the National Venue of Theatre in Bergen, Norway, on Sunday 4 November 2012.

The Rafto Foundation in Bergen, Norway, was established after the death of Professor Thorolf Rafto in 1987, in gratitude of his longstanding work to help people who are oppressed and persecuted, and in the realization that this work must be ongoing.

As an activist, Bassey cut his teeth when he worked as a member of the board of the Civil Liberties Organisation. His turning point was in 1990, when he witnessed the Nigerian military attack on the village of Umuechem, after a demonstration against the destruction of the environment by oil companies. He along with some colleagues founded ERA in 1993.He is now the Executive Director.