Henry Boyo: Nigerians Are Much Poorer 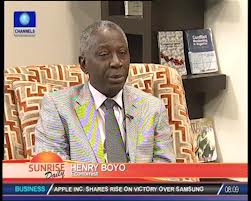 Q: How would you assess the current state of the Nigerian economy?
I’d like to start by talking about the social welfare of people because that is the most significant index. And if you have to measure growth, that is a kind of social index of sort.
Yes, there might be mobile phones, faster means of communications and more Nigerians may be travelling by air and all that than when we had independence in 1960. But the chances are, if you ask people who were much younger in 1960 and who are still alive if life was better then than now, they would probably tell you yes, in spite of all the optical progress in terms of mobile, air plane and others. They will tell you life was more livable and easier then.
If you take into consideration the basic instrument of exchange, which is money, you will find that the purchasing power of income earners has depreciated significantly between 1960 and 2012. For example, in 1960, with one kobo, you could buy two oranges. Today, one orange could cost about N50 or N100. Meanwhile, you cannot say the same thing for the level of income. The level of income cannot be seen to have escalated as quickly as the price level. So, basically, poverty has become a trademark in the past 20 or 30 years.

Critics say the CBN governor is not committed to growing the economy because of his harsh monetary policies. What is your position on this?

One thing that is not also clear is that the instrument of monetary policy contains the engine of growth of the economy. What galvanises the available resources is manpower, be it middle or whatever. What galvanises all these into a productive channel to the achievement of improvement of the people’s social welfare is the instrument of monetary policy. So, resources by themselves don’t achieve anything. It is the monetary policy that does that. So, the success or failure of doing that depends on the appropriateness or inappropriateness of the monetary policy. You’d discover that because of that lack of knowledge on the part of many Nigerians, they will ask how can we grow when we don’t have infrastructure, when we don’t have this, when we don’t have that. They say this because they don’t know. They expect that government will provide infrastructure before we can grow. They expect that because there is no power, we cannot be talking of a multicultural economy. They believe that it is because we are producing predominantly oil that we are poor. These are all wrong assumptions. What is necessary and what is important or what we are missing is the appropriateness of the monetary policy model that we are operating. The instrument of monetary policy is significant for growth. Unfortunately, because Nigerians don’t know this, not only Sanusi, but also Soludo before him, all of them maintained or sustained the monetary policy payment model that ensures that we get poorer whenever we get richer, particularly through the increasing sale of crude oil or the increasing crude oil prices at the international market.

Why is this so?
When we earn foreign income. That foreign income is supposed to add value to our lives and also add value to our currency. But, instead of doing that, the process of infusing the foreign earnings or foreign exchange that we earn into the system is not only defective, it is destructive and it is poisonous to operating a socially beneficial monetary policy framework. So, in a situation where the more dollars we earn, the more naira is printed by Central Bank to compensate for not paying the dollars to the beneficiaries of that fund, printing naira or creating naira increases money supply. And even the Central Bank has said that an increase in money supply instigates inflation. But in spite of that true knowledge, the same Central Bank will capture your dollar earnings and print naira in what it thinks is the naira equivalent, not really a market-determined equivalent.. When they receive the $500bn that they share every month, they put it in their banks and they can now lend out to the tune of N5tn.

The CBN has been struggling to bring inflation rate to a single digit. Can they achieve it in the shortest possible time it promised?

It is not just a question of single-digit inflation rate, which will be 9 per cent or below. I keep saying if you want to be like an eagle, you don’t have to compare yourself with a duck. The issue must be a rapid development. Look at what happened in Europe regarding the rate of inflation, what obtains in America, Europe and others. Inflation at even 9 per cent makes it impossible for you to save. It should not just be single digit, it should be lower single-digit.
Is it true that money supply is expanding all the time and confronting less goods in the market? The answer is yes. Because every month, the federation pool is shared. At least 80 per cent of what they pay in federation pool is dollars, but we don’t see the dollars because the Central Bank will convert it and substitute it with naira by printing it or creating it. In other words, there is too much money chasing too few goods. But who is creating that too much money? Honestly, it is the Central Bank when it substitutes created money for actual dollar earnings. So, CBN is responsible for creating too much money in the system. That is what is called excess liquidity. But you should ask yourself: Does it make sense or how realistic is it to say the banks don’t have money to lend to the real sector at the same time that the CBN acknowledges that there is too much money in the system? How can the two occur side by side?
So it is inappropriate to expect that CBN can bring down inflation to lower single digit if the same CBN does not stop the inequity of excess liquidity that it has continued to sustain for almost 30 years. That is why I said the more dollars we earn, the poorer we become. The idea of mopping up excess money from the system at such a high cost is defeatist because you are now re-introducing the same money you took out because you want to reduce the money in the system.
Many companies are gasping. Where did the government get it wrong and what is the way out?
The CBN’s naira substitution for dollar is where the government got it wrong. If the banks can be buying treasury bills from government at the rate of 15 per cent, higher than the benchmark rate of 12 per cent (MPR), it pays to do so than lend money to the real sector at the rate of over 20 per cent, which the banks know will be difficult for the real sector to pay.
The way out is just the opposite of what the CBN is doing. The constitution did not give the CBN the power to substitute naira for dollar-derived revenues. That arrangement is not in consonance with the federal structure.