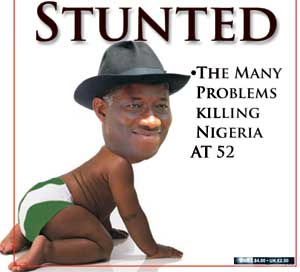 At 52, Nigeria is suffering from arrested development.

Almost at the same time, Nigeria and some Third World nations hunched over the same starting blocks. Fifty-two years down the line, Nigeria, which marks its independence anniversary this week, is trailing hopelessly behind, while the others have breasted the tape of development. When Nigeria gained independence on 1 October 1960, there was hope among the leaders and the led that the country would, by now, be on the path of growth. Unfortunately, it has remained stunted.

The relationship of Nigeria with Britain, its colonial master, started with the slave trade and its abolition circa 1807. After the Napoleonic Wars, Great Britain established the West Africa Squadron in an attempt to halt the international traffic in slaves and it stopped ships of other nations that were leaving the African coast with human cargo. “Sometimes it would take the freed slaves to Sierra Leone, its colony in West Africa, rather than return the people to the risk of renewed slavery in other coastal states,” wrote one historian.

After the 1884/1885 Berlin conference, and British claims to a West African sphere of influence received recognition from other European nations, it chartered the Royal Niger Company under the leadership of Sir George Tubman Goldie. While the company monopolised trade, it also had control over existing territories, made up of different nationalities. But this changed in 1900 when the company’s territory came under the control of the British government and a year later, Britain declared Nigeria a protectorate or part of the British Empire. However, in the late 19th and early 20th centuries, the existing ethnic groups resisted this invasion. Britain, with its gunboat diplomacy, subdued them. Examples were the British conquest of Benin in 1897, and the Anglo-Aro War in Eastern Nigeria from 1901 to 1902.

The British, in 1914, formally united the Northern and Southern Protectorates, bringing the Niger area under one administrative umbrella with Frederick Lugard as the governor-general. With the agitation for independence across Africa, Asia and the West Indies in the middle of the 20th century, Nigeria, too, caught the contagion.

At the vanguard of the movement in Nigeria were Herbert Macaulay, Nnamdi Azikiwe, Obafemi Awolowo, Anthony Enahoro, Aminu Kano, and others. Nigeria gained independence on 1 October 1960.

Many have attributed the under-development of Nigeria to the disparate nationalities forcefully welded together by the colonial masters. But this may not be totally true. Prince Metternich of Austria, in a letter on 19 November 1849, referred to Italy as “a geographical expression”. Otto Von Bismarck, the Prussian Chancellor, in a November 1876 letter to the Russian leader, Gorchakov, wrote: “Whoever speaks of Europe is wrong; it is a geographical expression.”

In fact, the late Chief Obafemi Awolowo used the same term on page 47 of his 1947 book, Path to Nigerian Freedom, arguing that Nigeria is not a nation, but “a geographical expression”.

While the other nations this phrase had been used to describe have not allowed the situation to be a liability, but an advantage, Nigeria’s case is different.

For example, Great Britain is an amalgamation of Scotland, England, Wales and Northern Ireland, different people with different cultural and religious backgrounds. Today, it is developed.

Rather than situate the problem of the country in its diversity, there are individuals who argue that the problem with Nigeria today is that of bad leadership.

According to Maitama Sule, a former Nigerian permanent representative to the United Nations, in the First Republic: “We had leadership that had the interest of the country at heart. And that is our problem today—dearth of good leaders, dearth of honest politicians. We have a saying in Hausa – ‘If any congregational prayer goes wrong, it is the Imam who is leading it that is to blame.’”

During that period, prebendal politics had not set in. Merit was counted for appointment or when aspiring to political office. It was for this reason that the economy of the regions blossomed. In the North, one of the major revenue earners was groundnut; West, cocoa and the East, rubber and palm oil.

The education system was so good that many African and Commonwealth countries sent their children to the universities of Ibadan, Lagos, Nsukka and Ahmadu Bello in Zaria.

Apart from the university teaching hospitals in Ibadan,Lagos, Ile-Ife, Nsukka and Zaria, which were centres of excellence, health institutions were so good that Nigerian leaders did not need to travel overseas for medical treatment. Foundations for infrastructural development were laid by the founding fathers.

In other words, they had big dreams that Nigeria would be a united, prosperous and peaceful country. They had a hope of a Nigeria in which all citizens would be their brother’s keeper. They had optimism of a Nigeria in which there would be peace and political stability—the prerequisites for development and progress. Therefore, the fathers of Nigeria – Dr. Nnamdi Azikiwe, Chief Obafemi Awolowo, Sardauna of Sokoto (Sir. Ahmadu Bello) and Malam Aminu Kano – had a vision that Nigeria would be developed.

The target then was that a prosperous Nigeria would, as one analyst put it, play the role that it was destined to play – inspiring other African countries and leading the Blacks throughout the world. In 1961 or 1962, there was an international report which indicated that three developing countries, India, Brazil and Nigeria would, in 15 to 20 years, join the industrialised nations of the world. That time, Pandit Nehru was the Prime Minister of India and Sir Abubakar Tafawa Balewa, was his counterpart in Nigeria.

While these nations have been making steady progress, Nigeria has been deteriorating. Apart from being a nuclear power, India is in the forefront of computer technology, it produces more doctors than any other country in the world, builds ships, manufactures aircraft, cars, missiles and so on. Moreover, it has the second fastest growing economy, second only to China. Brazil today is building ships, manufacturing planes and cars, producing modern weapons.

An illustration of how bad Nigeria has deteriorated is that it built its defence industry the same year as Brazil. While the latter’s fulfils the purpose for which it was established, Nigeria’s Defence Industries Corporation, DIC, in Kaduna now produces only furniture!

When the Military struck in 1966, profligacy set in. Successive governments did not build on the foundation laid by the founding fathers. General Aguiyi-Ironsi came in and turned Nigeria into a unitary state; General Yakubu Gowon who took over spent three years to prevent the secession of Biafra and after keeping Nigeria one, he was held hostage by corrupt technocrats. General Murtala Muhammed who took over from him did a weeding exercise in the civil service and in the process, as analysts put it, threw away the baby with the bath water.

It is generally believed that this exercise created a lot of insecurity in the civil service so much that officials started falling over one another to steal as much money as possible to prepare for the future. In spite of his good intentions, Muhammed was killed on 13 February 1976, in an abortive coup led by Colonel Bukar Dimka.

Muhammed’s deputy, General Olusegun Obasanjo became the new head of state, who in three years, started the process of the decline in the education sector. The Ali-must-go riots over the removal of food subsidy in the universities took place during his rule. He, however, handed over power to civilians, led by President Shehu Shagari in 1979.

Given the profligacy that characterised that government, it was booted out by General Muhammadu Buhari whose regime was accused of high-handedness. Then General Ibrahim Babangida came to the scene in 1985 and worsened the decline of the Nigerian economy. His introduction of the Structural Adjustment Programme led to the destruction of the real sector. Corruption became institutionalised. Politically, he blew the chance of making Nigeria great when he annulled the 12 June 1993 presidential election, won by the late Chief MKO Abiola.

Agitations within Nigeria and pressure from the international community forced Babangida to step aside. Chief Ernest Shonekan who came on board was soon shoved aside by the late General Sani Abacha. The new head of state went hi-tech with corruption, came down hard on the media and inflicted brain drain on the universities. But after his death, General Abudusalami Abubakar who took over, handed over power to civilians, headed by Obasanjo.

In Obasanjo’s second coming, the real sector suffered a big blow, as power supply plummeted. Obasanjo removed fuel subsidy with monotonous frequency and in the process, small and medium scale enterprises closed shop. In this situation, it was as if the poor had bought themselves a pile of trouble!

The Umaru Yar’Adua and Goodluck Jonathan governments only came over to exacerbate the situation of things. Apart from the economy that is on a tailspin, the education and health sectors have become so bad that Nigerian leaders now fly their children out to foreign universities and they themselves scamper out for medical treatment.

In fact, Nigeria has witnessed the collapse of manufacturing and the value chain that should accompany it. In the 1980s, manufacturing contributed up to 13 per cent of Nigeria’s Gross Domestic Product, GDP, but today it contributes less than 3 per cent.

This article is published in TheNEWS edition of 8 October, 2012