Yakassai: Nigeria will not break up 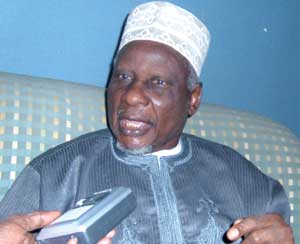 Alhaji Salihu Abubakar Tanko Yakassai, a former presidential aide, tells MADUABUCHI NMERIBEH that corruption is biggest of the factors that have abridged the country’s progress

Nigeria is 52 as an independent nation. The prevalent view is that the country has derailed. Where do you think we have derailed?

Undoubtedly, the history of Nigeria since independence has been a chequered one. A major failure we have been recording is the inability to deal decisively with corruption, which has stunted our growth and development. This is the reason we are lagging behind countries on the same level with us at the time of independence.

Successive governments have tried to tackle corruption, but failed. What is responsible for this failure?


What made us fail to arrest corruption is bad leadership.

How do we solve the problem of bad leadership?


We can only solve the problem of bad leadership by building a virile democracy and inculcating democratic culture in our people. There are countries that were worse than ours on matters of corruption and bad governance, but are now overcoming this menace through hard work and committed leadership. Philippines and Brazil are just two of them. Nigeria has never experienced virile democracy because by the time we were trying to build democracy after independence, the military stepped in and stopped the country from developing democratically.

But we’ve now had 13 straight years of democracy. Why do you think our leaders are still unable to defeat corruption after all these years?


I think we started the Fourth Republic with a leadership that was not wholly committed to fighting corruption and providing good leadership. The eight years of Chief Olusegun Obasanjo’s administration cannot be said to be wholly democratic. Then, we continued to build on that bad foundation.

What were the mistakes made during Obasanjo’s time that were not redressed by his successors?

The major one was Obasanjo’s deception in fighting corruption. It was Obasanjo that created anti-corruption agencies like the Independent Corrupt Practices Commission and Economic and Financial Crimes Commission, but he manipulated these agencies and prevented them from realising the objectives for which they were established.

What is your opinion on the type of federalism Nigeria adopted?

I have heard people agitating for what they describe as true federalism in Nigeria, but such people are yet to articulate their views on what constitutes true federalism. As far as I know, all the federations that we know in the world today are not identical. Each country models its own federal arrangement to suit peculiar national circumstances. No federation is a replica of another federation, just as no democracy is a replica of another democracy. Each democracy has a peculiar characteristic that differentiates it from the others. The only thing they have in common is the existence of the legislature. For me, our federation is accepted and adopted by Nigerians and those who are complaining against what we have are yet to submit their position for public approval.

But do you subscribe to the notion that Nigeria’s presidential system is too expensive?

Why do you think this is so?

Taking into account the tussle between the North and the South over 2015 presidency, coupled with the instability in the country, don’t you think Nigeria is at the edge of a precipice?

I have never entertained any feeling that this country is going to break up in 2015 or in the foreseeable future. I am basing my conclusion on the fact that the ordinary Nigerian from the North and South interact peacefully with one another in the markets and other public places. This means that all talk of Nigeria breaking up is coming from a few disgruntled individuals who constitute an insignificant percentage of the population of our country.

Do you agree that there is bad blood between political leaders of the North and South, which may result in an upheaval in or before 2015?
I do not hold such a view. Let me also add that anybody who is talking about 2015 presidency barely one year from the beginning of this dispensation is an enemy of Nigeria because what Nigeria requires at the moment is for the people to concentrate their attention on urging our rulers to fulfil their campaign promises. We should devote our time and energy to ensuring that those in power bring positive change to the country. Any debate about 2015 at this moment is diversionary.

Do you think Nigeria is capable of overcoming the mounting security challenges facing it?

Many countries faced security challenges bigger than our own. We heard of the British situation in Northern Ireland, which persisted for over 50 years and claimed more lives than we have seen in Nigeria. But that is now history. The situation in Algeria was more serious than what we have today. Now, peace and stability reigns in Algeria. So, our own problem shall, one day, become history.