Without fanfare, Flamingoes back from FIFA World cup 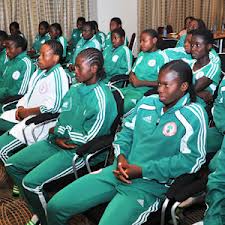 Nigeria's Women's Under 17 team back home

The Flamingoes of Nigeria arrived in Lagos on Friday night, after their FIFA Women’s World Cup campaign in Azerbaijan.

They arrived at 9.10 p.m. Nigeria time aboard Turkish Airlines, without fanfare.

The team lost 3-5 to France on Thursday at the quarter final stage through penalty shoot-out.

Also in the entourage are members of the NFF’s Executive Board and Chairmen of Cross River, Benue, Niger, Borno, Abia, Ekiti, Zamfara, Taraba, and Sokoto Football Associations.

Qualifying, the Flamingoes defeated Canada, routed host Azerbaijan 11-0 and beat Columbia before they were eliminated by France in the quarter finals.

At the arrival hall of the Murtala Mohammed airport, Lagos, Chief Mike Umeh said: “We cannot question God.It has been destined that we were going to stop before the finals and the girls tried their best but their best was not good enough.Besides, when it comes to penalty shooting, it may go to either side.
So, we are going to prepare for the next edition of FIFA U-17 Women’s World Cup, which I know we shall do better than we have done.’’

Chief Umeh said the team would not be disbanded but they would be nurtured for better performance in future.

He said that the players would be prepared to graduate into Falconets and Super Falcons accordingly.