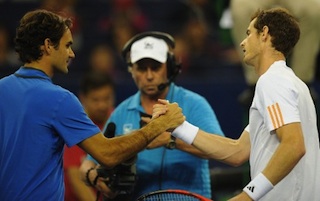 Andy Murray heaped the misery on Roger Federer on Saturday, taking advantage of an astonishing service meltdown by the Swiss great to set up a mouthwatering final against Novak Djokovic.

The US Open champion, who has never been beaten at the Chinese tournament, won 6-4, 6-4, repeating his victory in the Olympic final that came after the searing pain of defeat to Federer just weeks earlier at Wimbledon.

The pair swapped breaks at the start of the match but the first set hinged on an incredible fifth game when 17-time Grand Slam champion Federer was broken to love after the normally ice-cool Swiss double-faulted three times in a row.

Third seed Murray, who won the Shanghai Masters in 2010 and 2011, immediately put the world number one under the cosh at the start of the second set but the Swiss dug deep to save seven break points and edge ahead.

But Federer, 31, continued to struggle and it was the fifth game of the second set that again proved pivotal, with the 25-year-old Scot sealing a break against the Swiss, who had led 40-0, with a devastating forehand return winner.

Murray faced an agonising wait of more than half an hour to serve for the match as the roof was closed at the Qi Zhong Stadium after it started raining and an army of people descended on the court to dry the playing surface.

The players left the court and had to knock up again but Murray kept his nerve to serve out for victory, sealing the match when Federer netted.

Earlier, in-form Djokovic accelerated his push for the year-end number one ranking, dismissing the challenge of fourth seed Tomas Berdych in a one-sided match.

The Serbian second seed came into the clash with an impressive 9-1 lead against the Czech player in head-to-head match-ups and immediately took charge, dominating the contest to win 6-3, 6-4.

“Tomas is in great form in the last couple of months. He’s always a difficult player to play against on any surface because he has a very powerful serve and great forehand,” said Djokovic.

“I played tactically right,” the 25-year-old added. “I was putting a lot of returns into the court, making a lot of pressure on his serve. On the other hand, I was serving well when I needed to.”

Yet to drop a set in Shanghai, the Australian Open champion was ruthless, breaking at the first opportunity and repeating the feat as he threatened to run away with the opening set.

Berdych, 27, bidding to reach the elite ATP World Tour Finals in London, slowed Djokovic’s charge but could not prevent him from sealing the set, with a single break enough for the five-time Grand Slam champion in the second set.

Djokovic faded towards the end of a stellar 2011 but looks fresh as he hunts down Federer at the top of the rankings. He is looking to add the Shanghai Masters title to the China Open crown he won last weekend.

Because of his limp end to last season, Djokovic has relatively few points to defend in the rolling 12-month rankings whereas Federer has more to lose after a successful spell towards the end of 2011.