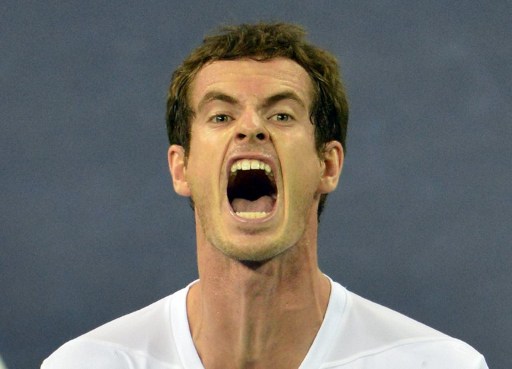 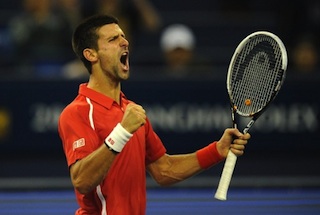 A gruelling first set contained seven breaks of serve as the players went toe-to-toe in a breathtaking display of power hitting, with neither able to grab the initiative.

But third seed Murray, 25, made what proved to be the crucial breakthrough in the 11th game, recovering from 0-40 to break for a 6-5 lead as an infuriated Djokovic destroyed his racquet, tossing it away in disgust.

It was a different story in the second set, with both players secure on serve until defending champion Murray broke in the seventh game to lead 4-3 when Djokovic put a volley into the net.

But agonisingly for Murray, Djokovic, refusing to be beaten, saved a match point to pull level at 5-5 and the set went into the dramatic tie-break.

The iron-willed Serbian, 25, denied the Scot four more times in the shoot-out, sealing the set with a drive volley that was followed by a trademark fist-pumping celebration.

Two breaks in the decider were enough for Djokovic to claim victory.

Murray beat his rival in five sets in last month’s US Open final to secure Britain’s first men’s Grand Slam singles title since the 1930s, just weeks after his Olympic triumph in front of home fans in London.

The Scot, who lost the Wimbledon final to Roger Federer, had never been beaten at the Shanghai Masters before Sunday, winning the 2010 and 2011 tournaments.

Djokovic came into the match on a 9-0 winning streak since losing to Murray, a run that included his third China Open title.

Djokovic enjoyed one of the finest seasons in tennis history in 2011, winning three Grand Slams. He is hot on the heels of Federer as he tries to secure the year-end number one ranking for the second year in a row.

“I’m obviously disappointed I lost the match,” said Murray. “But it was a top-quality match. Both of us played some unbelievable tennis at times.

“It was literally the difference of one, two centimetres in winning the match and losing it. You have to put things into perspective. It was obviously a bit frustrating but it was so close and could have been a different outcome.”