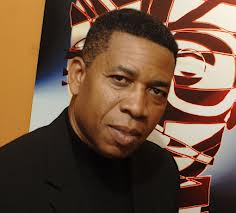 Tony Abulu, a United States- based Nigerian film maker and the first beneficiary of the $200million Entertainment Intervention Fund, has said it was his faith in Nigeria and his belief in President Goodluck Jonathan’s promise two years ago that made him access the fund. The producer and director who benefited from the fund to produce his star-studded movie, Doctor Bello said while Nigerians movie producers doubted the president’s seriousness, he believed in him; and it was the implicit confidence he had on the federal government that made him take the president’s pledge seriously.

“I was in Nigeria when President Goodluck Jonathan announced a $200million intervention fund for the entertainment industry. Everybody said it was impossible, that it was a lie and that there was no fund. And I said, ‘Do you believe that your president can lie? Do you believe as a national of your country that your president can make a statement to the entire world and lie? That means your country is useless.’ And I said I never believe that our president can lie and so I will collect the money. I said it in the presence of almost 700 people,” Abulu said.

The filmmaker, whose film will be premiered in Nigeria on 25 November, also decried the despondency of Nigerian movie producers, which, according to him, is not in the interest of the youths who look up to them.

“The youths who look up to producers in Nigeria were totally disillusioned on that day when the so-called leading producers said there is no hope at all for the industry. And I said to those people right there, ‘if you stand as a core producer in Nollywood today, you should be ashamed of yourselves because standing right behind you is a minimum of 2,000 young men that you have to give hope,” he said. .

In his opening address, the President of ANCOPS, Mr Alex Eyengho said strong copyright protection is the best mechanism to support the efforts of Nigerian film entrepreneurs in accessing capital, developimg and financing their projects, creating new skilled jobs and contributing to Gross Domestic Product. He also said strong copyright not only protects the value of investment necessary for film production but also sets the favourable conditions necessary to secure it.

“We call on Government to re-emphasize the primacy of copyright and exclusive rights as the engine of growth for film and other creative industries, to commit fully to maintaining the international copyrifgt framework and updating Nigeria’s copyright law accordingly. There is no development agenda without strong copyright,” Eyengho said.

“We invite government to consult with our industry on all current and future issues discussed at national level and at the World Intellectual Property Rights Organisation, WIPO, so that the needs and priorities of this important sector of Niferia’s economy will be taken into account in considering the evolution of the copyright framework both nationally and internationally,” he also said.