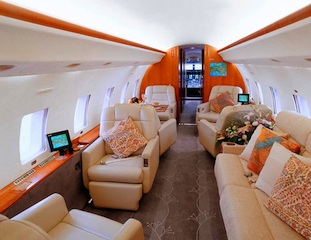 The Rivers State Government has confirmed the purchase of a brand new Bombardier Jet for Governor Chibuike Amaechi at a cost of $45million.

Mrs. Ibim Semenitari,the Commissioner for Information in reaction to inquiries by P.M.NEWS said “It was paid for two years ago. The reason is for safety. The new aircraft is a much safer one.”

She said the old aircraft will be sold.

According to a report, Amaechi acquired the brand new Bombardier Global 5000 (N565RS) for his exclusive use.

The report criticised Amaechi for going for such luxury ” at time hundreds of thousands of residents in his state are displaced by the worst flooding crisis in the state’s history”.

However,Semenitari pointed out that the purchase was made two years ago based on expert advice that the new one is safer.

She argued that the Governor duly consulted the Rivers state House of Assembly and the purchase was approved.

She said that the state government has not neglected the flood victims.

And then it was delivered to the state government on 7 October 2012.

The jet was primarily purchased from Bombardier in Canada for $45.7 million through the Bank of Utah Trustee account.

“This is an ungodly act,” said a Port Harcourt-based human rights campaigner.

Amaechi was said to have traded off the state’s current Embraer Legacy 600 claiming it was too expensive to maintain.

There were also unconfirmed claims that the jet was struck by lightning”.

P.M.NEWS recalls that the sale of Rivers’  Dash 8-Q200 aircraft to Cross River State for $6 million.

Cross River State government decision to lease the plane to Aero Contractors to undertake commercial flights to and from Obudu airstrip was a source of media war between the State Action Congress of Nigeria,A C N,the State government.

The state claimed it sold the plane at 6Million US Dollars,while the Cross Rivers state goverment claimed it bought it at 9Million Dollars.

The ACN spokesman,Jerry Needam, asked the state government to come out clean about the actual amount it sold the  aircraft.