The upset victory over the top seed in two and three-quarter hours denied world number one Federer a sixth title from the last seven editions at the St Jakobshalle and kept him from the 77th of his career.

Del Potro last beat the Swiss star in 2009 when he captured the US Open at Federer’s expense as well as posting a victory in the year-end final two months later.

Del Potro won the 13th trophy of his career and improved to 62-14 on the season.

“It’s an honour to be on the court with Roger, who is the greatest of all time, it’s great to share this moment with him.”

Federer suffered his first loss at the tournament which he has ruled since the 2009 final against Novak Djokovic.

“You played a great match and deserved to win,” Federer told Del Potro during the trophy ceremony.

“I beat you in a couple of tight matches this year, so it was your turn after those tough losses. I’m happy for you, you played a great match today.”

Del Potro won the opening set in just over half an hour before Federer settled in for a long afternoon in front of his home public.

The Swiss top seed took the second set into a tiebreaker and squared the tight contest at a set each on his third opportunity from Del Potro’s backhand wide.

The third played out in a similar vein as Del Potro won a huge third game lasting for 10 minutes in which he overcame two double-faults and saved three break points to hold for 2-1.

Federer set up a second tiebreak with three straight aces but was unable to carry his momentum forward to a seventh win this season over the South American.

Del Potro took a 4-2 lead in the decider and set up three match points from a backhand error from the Swiss. The second seed finished off the final on his first match point.

The last time the pair met, it took nearly four and a half hours for Federer to squeeze out a semi-final victory at the London Olympics, a match that went to 19-17 in the final set.

Del Potro now heads to the Paris Masters after qualifying this week for the eight-man field at the season-ending World Tour Finals in London, starting a week from Monday.

“I’m hoping to get back to my best level,” said the former top five-ranked Argentine, who missed the 2010 season with a wrist surgery.

“Roger gave me a really tough match. It is super to win this fantastic title.” 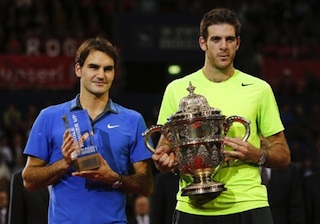 Federer was appearing in his seventh straight Basel final and ninth overall in 13 editions; he now stands 5-4 in hometown finals.

Del Potro expanded his win streak to 10 matches, last losing to Djokovic in the US Open quarter-finals.

He stands 17-1 indoors this season after adding Basel honours to trophies in Marseille, Estoril and Vienna.