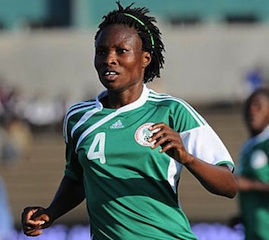 Defending champions of the African Women Championship, AWC, the Super Falcons of Nigeria Monday evening at Nkoantoma Stadium in Bata, Equatorial Guinea, got their title defence on a winning note, as they defeated the Lionesses of Cameroon 2-1 in a Group B opening tie.

The titanic clash saw both teams struggling on the waterlogged pitch of the stadium, following an early downpour, which prevented a free flow game.

But it was the Nigerians, who drew the first blood through Ohadugha Onyinyechi in the 44th minute. Her goal came in after the Falcons tried in vain to hit target on several occasions in the first half of the tension soaked match.

Although the Nigerian ladies were on the rampage from the blast of whistle, Ukaonu Helen’s shots were saved by the Cameroon goalkeeper, Ngo Ndom Annette Flore.

Efforts by other Nigerian strikers were also wasted.

The Cameroonian ladies however raised their game in the second half, and their effort paid off when Feudjio Tchuanyo Raissa scored from the penalty spot. That was after a Nigerian defender hacked down her teammate in the 18-yard box in the 53rd minute.

The equaliser spurred the Cameroonians to pile pressure on the Nigerian ladies, but the scoreline did not change until the 88th minute, when a free header from

Perpetua Nwocha earned the Falcons a deserved victory and the three points at stake.

Both teams gave very good account of themselves in the pulsating encounter, watched by a handful of spectators, but the Nigerians eventually avenged the defeat they suffered in the hands of Cameroon during the London 2012 Olympic Games qualifiers.