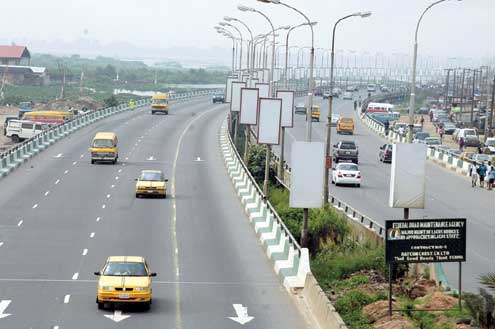 Lagos residents have given more knocks and less kudos to the President Goodluck Jonathan-led Federal Government over the rehabilitation of the Third Mainland Bridge, Lagos, southwest Nigeria, which was officially fully opened Tuesday, by the Minister of Works, Mike Onolememen.

Motorists and commuters who spoke with our correspondent frowned at government’s failure to replace the railings and street lights on the bridge.

They opined out that armed robbers capitalise on the dead the street lights on the bridge to attack and rob unsuspecting motorists and commuters of their valuables at night.

According to Adegbenro Adeeko, “the repair of the Third Mainland Bridge should have gone beyond the mere patching of the bridge and potholes. What about fixing of the railings and street lights or are they not part of the repair?

“I believe this is another form of scam in high places or how can they explain to us that the N1 billion spent on repairing the bridge does not cover the replacement of the railings and street lights? Lord have mercy on us in this our beloved country,” he said.

A motorist, Kunle Akindotun said, “I have no problem whatsoever about people commending the government for any policy or decision. But I am against the idea of heaping undeserved encomiums on people that throw crumbs at the masses while they ostentatiously display ill-gotten wealth.

“What is the big deal about Goodluck Jonathan’s administration rehabilitating Third Mainland Bridge? Until Nigerians begin to demand more from government, this administration and succeeding ones will continue to take us for a ride. What is the point in praising a government that has failed to rehabilitate the death traps called Benin – Ore, Lagos-Ibadan expressways and many other slaughter slabs called federal roads?

“It’s worrisome that the replacement of just eight expansion joints took four months, throwing us into hardship. In fact, the repair is not worth all the trouble,” he averred.

According to Ajoke Ekundayo, “rebuilding a federal bridge, which is primarily its responsibility, will not buy Jonathan any vote. What has he done? Let him repair Lagos-Ibadan expressway where Nigerians die everyday because of government’s inaction or start the construction on the 2nd Niger or 4th Mainland Bridges, then we can say he is working.”

A commuter, Odion James commended the Federal Government and President Goodluck Jonathan for the repair work carried out on the bridge.

“In Lagos alone, they have rehabilitated the Apapa-Oshodi expressway with drainage and expansion works awarded to construction giants, Julius Berger. They also built a dedicated bridge linking Tin can with Liverpool roundabout. They are also working on Benin-Ore-Sagamu handled by this same Borini and Reynolds Construction Company. More power to the Federal Government’s elbows,” he said.

“What a relief, I can’t wait to move unhindered on the bridge at any time I choose to. Please extend similar actions to the Lagos-Ibadan expressway and the Lagos-Benin dual carriage way,” said an elated Chika Ifeanyi, a second hand clothes seller on the Island.