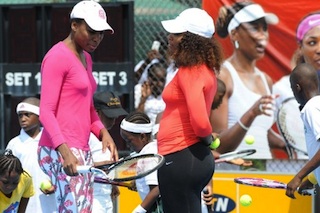 The Williams sisters, Serena and Venus have declared that they are purely Americans, saying they have no origin from Nigeria as widely believed in Africa.

Serena, who joined her elder sister, Venus to train some selected kids the rudiments of tennis at the Ikoyi Club in Lagos Wednesday evening, said their parents may be black with slight traces from Africa, but she insisted that they are from the United States of America, USA.

“We have heard from many people asking whether we hail from the Badagry area of Lagos in Nigeria. But we are using this opportunity to clear the air once and for all. We are proud Americans, we are not from Nigeria but we love the people of this country no doubt,” Serena said.

Venus, who corroborated Serena’s statement, said their parents never told them they are from Nigeria.

The Williams sisters said they were blessed and happy to have one of their siblings, Yetunde now late, named after a Nigerian, but disclosed that their mother Oracene Price gave her the name without any string attached. 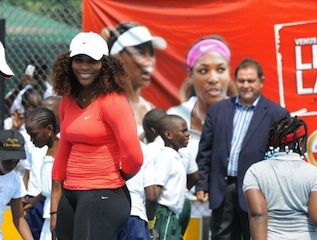 During Wednesday’s tennis clinic at the Ikoyi Club, the sisters tutored some children the basics of tennis.

Serena and her sister will hold a sessions for some girls at designated schools in Lagos on Thursday, while they will face eachother in an exhibition match at the Lagos Lawn Tennis Club, Tafawa Balewa Square, TBS on Friday and leave for South Africa for the second leg of their tour of Africa same day.