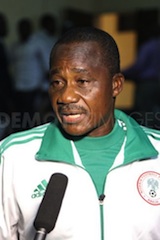 Nigeria’s Super Falcons Thursday evening defeated Ethiopia 3-0 in their second Group B match of the ongoing African Women Championship, AWC, in Equatorial Guinea, to brighten their chances of advancing to the semi final stage of the tournament.

The match, played at the Nkoantoma Stadium in Bata, saw the coach Kadiri Ikhana-tutored Falcons struggling before they registered their first goal through Esther Sunday in the 27th minute.

The Ethiopians, who lost their first match 5-0 to Cote d’Ivoire stretched the Nigerian ladies from the blast of the whistle, but the Falcons broke down their tight defence when Esther got the curtain raiser.

Esther finished up a perfect cross from Ogbiagbevha Emueje after a combination of passes with Perpetua Nkwocha from the right flank.

About four minutes after the opening goal, the Ethiopians responded by breaking through the Nigerian defence line anchored by Rita Chikwelu and Ebi Onome, as Bekele Helen was left unmarked with only goalkeeper and skipper Precious Dede to beat, but she was caught in an offside position.

Efforts by both teams to score more goals in the first half did not yield any fruit despite the four minutes extra time given by the referee because of the time wasted due the a serious head injury suffered by an Ethiopian player.

The second half began with both teams playing more in the midfield, this resulted in both goalkeepers not tested for more than a quarter of the match.

Despite the renewed energy by the Ethiopians in the stanza, it was the Super Falcons who scored their second goal in the 64th minute through experienced player, Stella Mbachu.

The aggressive winger lashed onto a through pass from Okobi Ngozi and netted a rocket shot that caught goalkeeper Ossa Liya of Ethiopia napping.

Before the Ethiopians knew what hit them, Falcons’ veteran striker, Perpetua Nkwocha made it 3-0 for Nigeria in the 66th minute, her second goal of the tournament.

The introduction of Chukwudi Ogonna and Iroka Glory by coach Ikhana in the last ten minutes changed the tempo of the tie, as the Falcons scored two more goals, but the referee ruled both goals offside.

In the other Group B match played earlier on Thursday, Cameroon’s Lionesses, who lost their first match 2-1 to Nigeria, defeated Cote d’Ivoire 4-1 to place second with 3 points.

The Nigerian team are first on the table with six maximum points from two matches, Cote d’Ivoire, who beat Ethiopia 5-0 in their first match are third with three points, while Ethiopia are fourth without a point.

Hosts, Equatorial Guinea are on top of Group A with six points from two matches played so far, while South Africa’s Banyana Banyana and DR Congo are second and third respectively on the table with three points apiece.