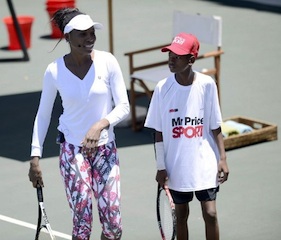 Five to a side, two groups at a time, the pint-sized hopefuls in white T-shirts and red caps are determined to catch the attention of the world’s greatest tennis siblings with their best strokes.

“Move your feet!” cries Serena Williams while running in place, waiting for her sister Venus to hit the ball from the other side of the court. The students eagerly follow suit.

Some balls are sent neatly back over the net at the Arthur Ashe Tennis Centre, named for the first black American tennis player ever to win a Grand Slam.

“Remember to always keep your eyes on the ball,” Serena advises, her hair bulging from below a white cap.

Their tennis heroes’ visit is not lost on the young sportswomen and men.

“It was exciting and scary at the same time,” says 12-year-old Mmabatho Makutu after her session.

“I learnt a lot, like volley, forehand, backhand and smashes.”

The Williams sisters have traveled to South Africa to promote the sport among Africans, and especially girls, after a similar visit to Nigeria earlier this week.

Organisers of the tour, called “Breaking the Mould”, hope to inspire girls to reach for their dreams in a continent where women’s rights often lag behind.

“Having the opportunity to show these women you can break the mould … can really create champions,” Serena told an earlier media conference.

“Obviously there’s tonnes of potential in town here on this continent,” her sister Venus agreed.

Some have grabbed onto their message in this former blacks-only suburb southwest of central Johannesburg, where the country’s first black president Nelson Mandela and Nobel Peace Prize laureate Desmond Tutu used to live.

“Here at the courts they call me Little Serena because I have what it takes to be her,” says Mmabatho Makgale, 12, after playing on the star’s side in a mini-doubles match against Venus’s team. Team Serena won.

Mmabatho decided to become a professional player when she saw one of Serena’s matches as a six-year-old on television.

“I just knew that this was what I wanted to do,” she says.

Others are happy to watch from the sidelines.

“I’m a little shy,” says Lulu Dwanya, eight, her head drowning in a white cap which Venus Williams autographed on her way onto the court.

This is exactly the effect national tennis organisers wanted the campaign to have as the sport faces troubled waters here.

This year’s South African Open and Soweto Open were both cancelled because of lack of sponsors, and tennis remains the sport of the affluent.

Few people can afford lessons for their children and live close to decent facilities.

The national association runs development programmes in disadvantaged communities in seven urban hubs across the country.

“Those of us coming from townships know that there are too many challenges,” Zondi says, adding: “Especially girls face more challenges than boys.”