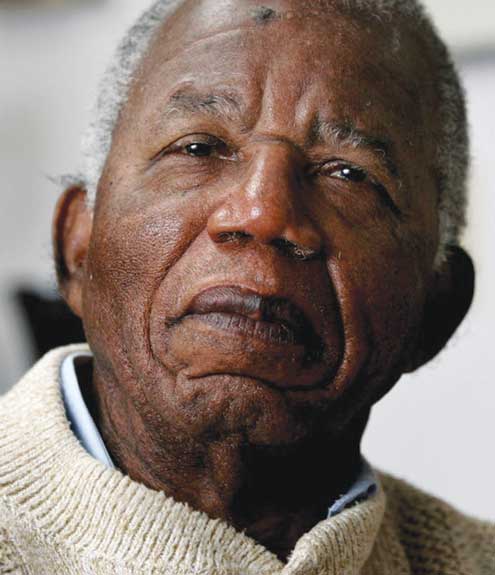 Weeks after it broke out, the debate provoked by Chinua Achebe’s There Was A Country is still as bruising and acrimonious as a prize fight–and has enormous potential to remain so

The Yoruba political establishment and intellegentsia can bear almost anything on the chin–except uncomplimentary remarks about the late Chief Obafemi Awolowo. If there exists a political divinity, Awolowo is it. Any criticism of him attracts a charge of blasphemy from his army of devotees.

Whether the critic is a fingerling or a big fish is considered unimportant. It is a virtual faith poistion, one that brooks no in-between. And four weeks ago, when the view of a big fish, Professor Chinua Achebe, was perceived to have slighted Awolowo, the response from Yorubaland was like the gust from a crematorium. What set this off was an excerpt of There Was A Country, Achebe’s latest book, in which Awolowo, the wartime Federal Commissioner for Finance, and others in the cabinet were accused of fashioning “a boatload of infamous and regrettable policies” during the Nigerian Civil War.

The war, which claimed a lot of lives in Achebe’s Igboland, infamously had starvation as one of its most lethal weapons. Relying on a statement credited to Awolowo, Achebe accused him of being a party or author of genocide.

“All is fair in war, and starvation is one of the weapons of war. I don’t see why we should feed our enemies fat in order for them to fight harder,” Awolowo was quoted as saying.

The inference Achebe draws from this is that Awolowo resented the progress the Igbo had made at the time and desired their subjugation for the advancement of the Yoruba.

“It is my impression that Chief Obafemi Awolowo was driven by an overriding ambition for power, for himself in particular and for the advancement of hisYoruba people in general. And let it be said there is, on the surface, nothing wrong with those aspirations. However, Awolowo saw the dominant Igbos at the time as the obstacles to that goal, and when the opportunity arose–the Nigeria-Biafra War–his ambition drove him into a frenzy to go to every length to achieve his dreams. In the Biafran case, it meant hatching up a diabolical policy to reduce the number of his enemies significantly through starvation–eliminating over two million people, mainly members of future generations,” Achebe writes.

He also accused the late politician and others in the Federal Cabinet of designing policies aimed at economically scything the Igbo after the war, ensuring they never regained the vibrancy they once had. “After the conflict ended, the same hardliners in the Federal Government cast Igbos in the role of treasonable felons and wreckers of the nation and got the regime to adopt a banking policy, which nullified any bank account which had been operated during the war by Biafrans. A flat sum of twenty pounds was approved for each Igbo depositor of the Nigerian currency, regardless of the amount of deposit,” alleges Achebe.

Despite not having read the whole of the book, the Yoruba political establishment rose with fury against what it perceived as Achebe’s rancid revisionism. Appeals that reactions be deferred to when the book must have been read were studiously ignored. While some dismissed Achebe’s attack on Awolowo as nothing more than a cheap trick to sell his book, others delivered more infernal verdicts. Some in the latter category questioned the author’s fidelity to facts and their contexts before branding the book as no more than a one-eyed view of events.

Femi Fani-Kayode, a former Minister of Aviation, was one of the first to shoot, describing Achebe’s account as a “tale of fantasy”. While not denying the fact of the starvation, Fani-Kayode argued that the blame belonged to Emeka Odumegwu-Ojukwu, leader of the secessionist effort, and nobody else. “The bitter truth is that if anyone is to be blamed for the hundreds of thousands of Igbos that died from starvation during the civil war, it was not Chief Awolowo or even General Yakubu Gowon, but rather it was Colonel Emeka Odumegwu-Ojukwu himself. I say this because it is a matter of public record and a historical fact that the Federal Government of Nigeria made a very generous offer to Ojukwu and the Biafrans to open a road corridor for food to be ferried to the Igbos and to lessen the suffering of their civilian population. This was as a consequence of a deal that was brokered by the international community who were concerned about the suffering of the Igbo civilian population and the death and hardship that the blockade was causing to them. Unfortunately Ojukwu turned this down flatly and instead insisted that the food should be flown into Biafra by air in the dead of the night. This was unacceptable to the Federal Government because it meant that the Biafrans could, and indeed would, have used such night flights to smuggle badly needed arms and ammunition into their country for usage by their soldiers,” wrote Fani-Kayode. He accused Ojukwu of using the grim images of the starving people for propaganda. The former minsiter cited Reflections On The Civil War, a book by Ambassador Ralph Uwechue, Biafran Envoy to France, which expressed views similar to his and urged Achebe to go back to read it.

So did the letter of resignation of Robert S. Goldstein, Biafra’s Public Relations Representative in the United States, not attract Achebe’s attention. Goldstein, in the letter published in the Morning Post of 17 August 1968, expressed his displeasure at what he viewed as Ojukwu’s desire to manipulate world opinion using the starvation of the people he had led to war. He blamed Biafra for declining to open a land corridor through which food could get to the starving.

Chief Ayo Adebanjo, a notable Awolowo follower, accused Achebe of manisfesting “Awophobia” and denied the charge on Awo as an Igbo-hater.

“If it is true that Chief Awolowo was such an architect of pogrom and genocide against the Igbos, how would Professor Achebe explain the fact that there were no incidents of pogrom or genocide against the Igbos in any part of the then Western Region, composed mainly of the Yorubas, and Chief Awolowo’s primary sphere of influence?” Adebanjo asked. He further argued that the Igbo, who fled the West, had their properties kept safe for them, with the rents collected on the properties duly accounted for at the end of the war and paid to such property owners.

Adebanjo argued that what Awolowo supported was stopping food supply to Biafra so that rebel soldiers would not be feeding on what was left for the civilian population. He challenged Achebe to explain why, if the objective of food blockade was to reduce the Igbo population, Awolowo did not push for its continuation or to be intensified when federal troops took control of Biafran territory at the end of the war.

Responding to the charge that Awolowo engineered the financial emasculation of the Igbo, Adebanjo explained that the federal currency, which Biafran soldiers had looted from Central Bank locations in seccesionist areas, were being used to buy arms for the Biafran Army.

This, he explained, made Awolowo change the Nigerian currency without informing the cabinet or General Gowon, the head of state. Similarly, Adebanjo contended that Achebe’s charge of economic emasculation of the Igbo is unsustainable.

“At the end of the civil war, a problem did arise with respect as to how to verify the amounts creditable to Biafrans, who made claims to money held in Nigerian banks before the declaration of war. Unfortunately there were no records to confirm the amount in savings or current accounts held by a good number of such Biafran claimants. As a result, a committee was set up by the Central Bank, the members of which were unknown to Chief Awolowo. Such committee recommended an across the board payment of £20 to every claimant,” he explained.

He described the allegation as uncharitable and further argued that in the face of such unverifiable claims, it would have been economically suicidal if all Biafran claims of huge sums had been entertained. After the creation of the 12-state structure by Gowon, Adebanjo added that Awolowo saved the monthly allocation due to East Central State during the war and released same to it as well as assisting the rejuvenation of the African Continental Bank, ACB, and the Cooperative Bank for Eastern Nigeria, the two major Igbo-owned financial institutions affected by the war. “Professor Achebe would have to explain how these actions beneficial to the Igbo emanate from somebody whom he claims has hatred for the Igbos or harboured intent to deliberately and systematically exterminate the Igbos or deny their right of existence as a group,” he said.

Achebe’s supporters have not been quiet. Joe Achuzia, a major actor in the war on Biafran side, blames the genocide on Gowon and Awolowo. He accused Gowon of acquiescence to what was being done during the war.

Achuzia, who is about completing his own memoirs, said his book will settle the debate when released. “When Gowon took over, he relied more on Awolowo and the permanent secretaries–Allison Ayida, Phillip Asiodu–in formulating policies. Immediately Awo was released from prison, which Ojukwu was instrumental to, thinking he had a friend, strong anti-Igbo sentiments welled up in the government. Unfortunately, Awo never forgives nor forgets,” said Achuzia.

The Biafran fighter attributes Awolowo’s anger with the Igbo to the accord between the NPC/NCNC.

Similarly, a former General Secretary of a Lagos chapter of Ohanaeze Ndigbo, Mr. Pascal Chimezie, criticised Yoruba leaders who have defended Awolowo. Chimezie is of the view that Awolowo and Gowon were responsible the death of Igbo children through malnutrition.

While admitting that Ojukwu erred by rejecting the land corridor arrangement made to allow food and relief materials to get to Biafrans, he said: “Many Yoruba leaders who commented on Achebe’s book and were defending Awolowo were foreigners in Biafra. They did not live there to see how children were starved and died of kwashiokor,” he said.

Chimezie said Biafra lost the war chiefly because of British support for Nigeria and claimed that those involved in the atrocities were spared trial for war crimes by the International Court of Justice because they were wired internationally. The blame game continues and is bound to be aggravated when Achuzia’s book is released.