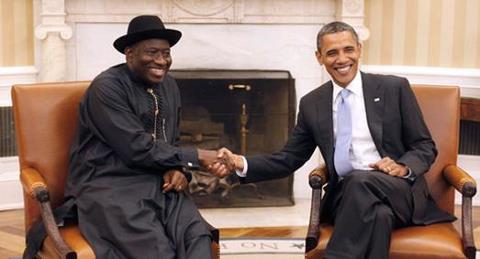 President Goodluck Jonathan has, on behalf of himself, the Federal Government and the people of Nigeria congratulated President Barack Obama  after he was re-elected in yesterday’s presidential election in the United States of America.

In a press release signed by Reuben Abati, his spokesperson on Wednesday, President Jonathan said he welcomes President Obama’s victory in the intensely fought presidential race as an endorsement by the good people of the United States of his leadership, progressive world view and the very good work he has done in the past four years towards ending global economic recession and fostering global peace and security.

“Nigeria, the Economic Community of West African States and the African Union enjoyed very cordial and productive relations with the Obama administration in his first term; President Jonathan looks forward to continuing to build on Nigeria’s and Africa’s developmental collaboration with the United States in the next four years.

“The President looks forward in particular to further strengthening US-Nigeria bilateral relations and the US-Nigeria Bi-National Commission which was established in President Obama’s first term as the primary platform for the promotion of greater trade and economic cooperation between both countries as well as bilateral collaboration in other areas.

“President Jonathan also hopes that millions of people across the world, especially those in developing nations who watched the beauty and strength of democracy unfold in the United States presidential elections yesterday will come to a greater and better appreciation of democracy as the key to building peaceful, stable and progressive societies.

“The President wishes President Obama continued good health and God’s blessings and guidance as he prepares for his inauguration in January for a second in office as the President of the United States of America,” Abati said in the statement.