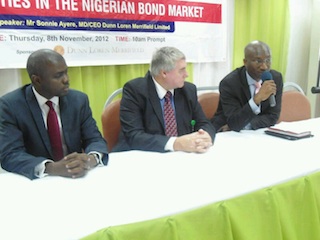 The value of bond investment at the nation’s capital market has been put at over N7.2tn.This disclosure was made by Mr.Malcolm Gilroy,Global Head,Sales and Trade ,Dunn Loren Merrifield,a major player in the market.

Speaking at a forum the company organised for capital market correspondents in Lagos today on the topic ”-Opportunities in the Nigerian Bond Market”, Gilroy said of this amount,the Debt Management Office,DMO,issued bond worth N3.5tn while that issued by the Asset Management Corporation,AMCON,stood at N3.2tn just as bond issued by some state governments and a few corporates were valued at over N500bn.

Contrary to the belief that investment in bonds is risk free,the Canadian argued that bonds are exposed to credit and market risks.He said as yield rises, prices of bonds falls.

What causes yield/price changes are the forces of demand and supply,new bonds issue and new investors (as happened when JP Morgan included the FGN Bonds in its index.Another cause is change in inflation rates.

Gilroy noted that all FGN bonds are guaranteed by AMCON,a development that will further attract both local and foreign investors into the bond segment of the market.Interestingly,the government offers high coupon rates of between 12 and 16per cent.

And with the renewed investor confidence in the capital market and the ongoing privatisation of the power sector,there will be a boost in both the equity and the bond market of the Nigerian Stock Exchange,Gilroy remarked.

Dunn Loren Merrifield is an Issuing House that has participated in many offers as lead issuer.The company has offices in Lagos,London and New York.It is among the 1O market makers appointed by the management of the Nigerian Stock Exchange to inject liquidity into the market.