Talent Pushed Me To The Top 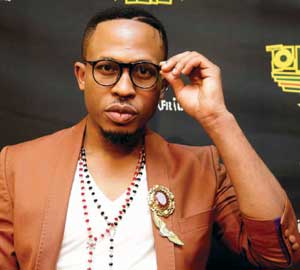 How would you describe your experience at the recently concluded Hennessy Artistry project?

It was wonderful working with M.I on the Hennessy Artistry project this year. We both had a wonderful time recording the theme song with TY Mix, who produced the song. M.I is a top notch rapper and I am holding my ground in my own arena. When you bring this type of two people together, the creativity is unbelievable. I considered it an honour to be part of this project. We had unbelievable experience during the club tour around the country. As you know, Hennessy is a premium brand that represents excellence, so I didn’t think twice collaborating with them, considering what the brand has done for Nigerian entertainment, especially the music industry.

But this is not your first time working with the brand?

Yes. I was a guest judge at the contest, which produced Ice Prince in 2009. Then, Ice Prince was a budding talent and you can see that we made a right choice on the account of what the young man has become. He is one of the young successful artistes, not only in Nigeria, but on the continent. He has earned a prestigious BET nomination and a number of awards on the global music scene. So, that is part of the opportunities presented to artistes and other creative persons in the music industry by the Hennessy project

It is obvious that this year has been so good to you.

You can say that again! This year 2012 has been a very busy one for me. The year’s success was a spillover of 2011. I have been touring since February. Week in, week out, I have been performing at various gigs and concerts in the United States, United Kingdom, South Africa, Kenya and Malawi among others. But we are working so hard to build myself up as a premium hip-hop brand in Africa and try to raise the bar so that we can take things beyond our continent.

What has been the response to your last album?

That was my sophomore album and there has been a lot of positive reactions from fans and music lovers globally. The album has yielded a number of hit songs, including 10 Over 10, I Gentle, 5 & 6 and Ako Mi Ti Poju. And the response to all these songs has been strong enough to re-establish me to where I needed to be or close to that because after I dropped Kini Big Deal, I went back to school. I went to University of Dundee for my Msc in Energy, specialising in Energy Economy. That took me off the scene for a while. And you know that in this business, most people will try and convince you not to go off scene for too long because the audience is always quick to move on to the next rave. By the time I came back, I was neither here nor there, as fans had moved to the other artistes. So Naeto C had to re-establish himself and I was able to do that with the release of 10 Over 10, 5 & 6 and Ako Mi Ti Poju. Those tracks actually worked with the Nigerian audience that they decided that this guy should be here. That was how that album helped me.

How far have you gone with your next album?

The next album is almost ready. It is designed to help me do more because I need to make sure that I am holding my fans and able to gain more fans.

What was your mom, Dr Kema Chikwe’s initial reaction when you told her you are going into music?

She raised eyebrows and wasn’t receptive in the beginning because she wasn’t sure of what I would make of it. And at that time, hip-hop in Nigeria was still very young. We didn’t really have a Naeto C, who I could show to my her and say: ‘Look at this guy, he is so respectful and went to school’. She was a little bit worried. But over a period of time, I guess she realised that I had my head on right and doing the music respectfully and responsibly. She became a supporter and is now my biggest fan.

How would you react to suggestions that your privileged background accelerated your development in music?

First and foremost, people need to know that I have a passion for music. Secondly, my passion for music was so much that my background could not have acted as either an obstacle or catalyst to have a breakthrough on the music scene. Then, do I have the talent? I can confidently say yes. So, my privileged background wouldn’t have pushed me to the level I am without the talent. But I thank God that I had the opportunity to have this career because I have been able to accomplish a lot during a short period of time through music. I was never in a situation where my hits were bought for me or my personality was bought for me. What was so important is that I have been able to do this music positively, respectfully and responsibly. And that sends a good message out to other parents whose kids would have wanted to be musicians, but would have looked at the industry from the outside. My background has done nothing short of encouraging me to do this music business right and exceptionally well so that I could maintain that same respectability whether inside or outside music.

You seem to have been the only top artiste that has stayed this long with Storm Records. What has kept you around while others have walked?

To be honest, I have been doing my things and successful with Storm.  I can’t really tell you why they left, but I can say to you that I did not have the same problems they had with Storm Records. The most important thing is that once you are doing well, why move?

What would you say of the criticism of your claim of being the only MC with Msc?

I said in that song that there is nobody as popular in the industry as me that has an Msc. That’s number one. I said it in the context of in 2009, when I left the country to do my Msc. There was nobody who had a song as big as Kini Big Deal or as popular as I was and I was willing to risk everything for an education abroad. A lot of people took the line as bragging, but to me, it is beyond bragging. After I returned, I did hear that so and so person has Msc, but as far as I am concerned, none of them took the risk that I took. I am the only person at such success level that felt the need to go back to school and get a second degree and still come back and be successful.

But what do you really need the second degree for?

I need it to explore other opportunities for myself. In Nigeria, I believe individuals like myself have to be entrepreneurs in order to succeed. At my stage, I can no longer do 9-to-5 job. It’s either I own a business or I’m buying into one. And we all know that knowledge is key and power. I can only have options if I can increase my knowledge base, which was why I went to obtain an Msc. Now that I have done that, I have more options. I can’t be the only MC with Msc forever.

You took many by surprise some months ago when you announced your wedding date. Were you under any pressure to do that prior to that decision?

I wasn’t under any pressure. I noticed everything around me and the situation was right. That was why I decided that time that it was the best time for me to take the plunge into the marital life.

How are you finding the new life?

It has been a blessing and I am thanking God that I took the step. I have been happy ever since.

Were you really disturbed that a car gift to you during your wedding raised so much dust afterwards?

No comment please. I don’t want to talk about it

Because it was too sticky and I don’t want to create another leg to it, please.