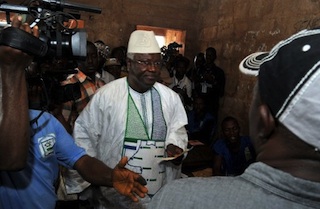 Voting has ended in Sierra Leone and the electoral officials have begun the tallying of votes after a general elections seen as a litmus test of country’s post-war recovery.

On Saturday night after polls closed, citizens crowded around radios as provisional results from individual polling stations were announced.

Sustained cheers, vuvuzela blasts and whistles erupted across a ruling party stronghold in Freetown as incumbent Ernest Koroma’s All People’s Congress (APC) pulled ahead in parliamentary poll results from the provinces. His challenger is Julius Maada Bio of Sierra Leone People’s Party.

Decisive results are not due until later next week and final results will be announced on November 26.

The poll is seen as a tight race between Koroma who has overseen a construction boom, and ex-military leader Julius Maada Bio who has amassed support amongst many still struggling to survive in what is still one of the world’s poorest nations.

Koroma is regarded as the favourite, but analysts expect a tight race.

While no major incidents have marred the election process, it will be most fragile when results are released. Both candidates have said they are confident of victory and Bio has warned he will not accept a “dirty election.”