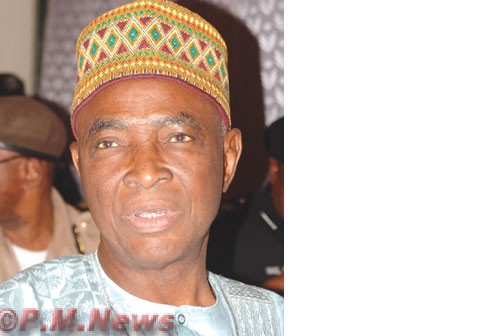 He said: “It is the principle of my dad to always put smiles on the faces of the less privileged, it is also my father’s belief that women are always straight forward in their dealings. I am happy to inform you today that we the children shall not let the people of Kwara let down. Myself, my mother and siblings will endeavour to continue from where our late father stopped.”

Saraki, who is also the Chairman Senate Committee on Ecology and Environment,however, implored all and sundry to stand by the family in order to achieve the hopes and aspirations of the late Saraki for the people of the state.

In his sermon, the Chief Imam of Offa, Ustaz Muyideen Hussein urged the political class to have the fear God and act in accordance to His doctrines by alleviating the suffering of the citizenry in order to have a meaningful end like the late Saraki.

Ustaz Hussein, who eulogised the virtues of the late Saraki, described him as a ‘Messiah’ who came to rescue the people of the state from poverty and backwardness through his unique political ideas and philanthropic gestures.

He, however, urged members of the Saraki family to come together and ensure unity of purpose if they hoped to sustain their late patriach’s legacies.

Leading the fidau prayer, the Chief Imam of Ilorin, Alhaji Muhammed Bashir Fulani prayed Allah to grant the late Saraki entry to paradise and keep the family firm in the interest of peace and unity of the people of the state.

Other dignitaries that graced the occasion included the Emir of Ilorin, Alahji Ibrahim Sulu-Gambari who led a number of traditional rulers from within and outside the state, the host Governor, Alhaji Abdulfatah Ahmed, Governors Gabriel Suswan of Benue state, Idris Wada of kogi state, Saidu Dakingari of Kebbi state, Aliyu Babangida Mu’azu of Niger state, Adams Oshiomole of Edo state, Senator Danjuma Goje and various people from various walks of life.