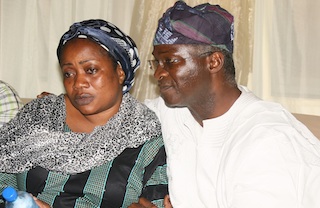 Governor Babatunde Raji Fashola and members of the Lagos House of Assembly have condemned the assassination last night of Toyin Hamzat, the former Ikeja council chairman and special adviser on health to the governor.

In a statement today, Fashola described as most unfortunate, shocking and heart rending, the fatal attack on his former Special Adviser on Health, Mr Toyin Hamzat.

According to the Governor, it was a supreme irony of life that such a man of peace who gave so much in the service of his nation and community could come to such a violent end.

While condoling with his Ogun counterpart, the Government and people at Ogun State as well as the immediate family of the deceased, Governor Fashola described Hamzat’s death as a personal loss to him, Lagos State and the entire South West family of the Action Congress of Nigeria.

The Governor prayed the Almighty Allah to grant the soul of the departed Al-Janah Firdaus and imbue the widow and family members with the fortitude to bear the irreparable loss.

Members of the Lagos State House of Assembly also today condemned the assassination of Hamzat in Sagamu.

The lawmakers, who discussed the incident at the floor of the House, described the assassination as one death too many.

Deputy Speaker of the House, Taiwo Kolawole, while calling the attention of his colleagues to Hamzat’s death, said he had not recovered from the shock since he got the information.

Kolawole described the late Hamzat as one who worked assiduously for Lagos state.

The Deputy Speaker said Hamzat would be greatly missed but that he would be remembered for his contributions to the development of the state.

Also speaking concerning the incident, Chief Whip of the House, Rasaq Balogun, said he received the death of the former Special Adviser with shock.

He said the late Hamzat performed well when he was Chairman of Ikeja Local Government council.

According to him, “the late Hamzat contributed to the development of the state and was one of the chairmen that had no skeleton in his cupboard.”

Olatunji Edet, another lawmaker, said there is now need for the government to take the issue of security serious in the country.

“I am sad about his death because he was an easy going person and party faithful,” she said.

Speaker Adeyemi Ikuforiji said he had a sleepless night as a result of the news.

He said that it was painful that the federal government had continued to play politics with the lives of the people.

“The issue of security is not taken serious in this country and the federal government also plays politics with the security of the country.

“Many lives have been cut short due to insecurity.

“In the next few weeks, we would have forgotten about his death and is parts of our great problem,” he lamented.