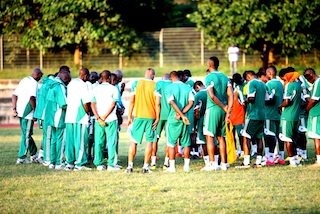 Former Nigeria national team coach, Clemens Westerhof has revealed that players bribed their way into the national team in the past.

Westerhof, who coached Nigeria to success at the 1994 Africa Cup of Nations in Tunisia and also led the Super Eagles to their first-ever qualification for the Fifa

World Cup in the United States in 1994, said the players who did not merit a place in the national team got call-ups after giving money to the selectors.

“We had a situation where we had the wrong people in the wrong places, even in the (Nigeria) FA,” Westerhof told supersport.com.

The Dutchman went on to specifically state that monies usually exchanged hands between national team selectors and the players when places in the national team were considered.

“We had cases where players paid $15,000 (about N2.8 million) to the coach and say ‘I want to play for the national team’ and the coach would accept. They bought their way into the national team and it was an unbelievable situation. Very sad. I know these things,” an angry Westerhof said.

With Nigeria set to compete at the 2013 Africa Cup of Nations from January, Westerhof said things have changed for the better under current head coach, Stephen Keshi.

“My captain (Keshi) is there now and you can see the changes because he selects the right people.

“Nigeria beat Liberia 6-1 in a 2013 Africa Cup of Nations qualifier and outclased Venezuela (in an international friendly earlier this month). The results come because players are now selected on merit.

Westerhof, 72, began his career as an assistant coach with Feyenoord Rotterdam in the Dutch Eredivisie.

He has also coached Vitesse Arnhem, the Zimbabwean national team, the Sporting Lions of Zimbabwe’s Premier League, and the Bush Bucks and Mamelodi Sundowns of South Africa’s Premier Soccer League.