Adekunle: How I Coped In Prison 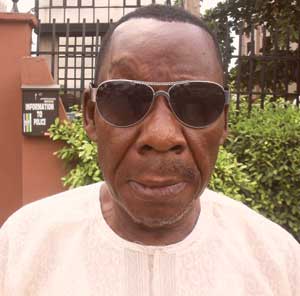 General Prince Adekunle, Juju music star of the 70s, recently clocked 70. In this interveiw, he tells Entertainment Café about his career highs, the lows, particularly the conviction for drug running, as well as his relationship with Shina Peters and Segun Adewale

I have been around playing music as usual.

You turned 70 recently. How do you feel attaining that age?

I thank God that I am alive to celebrate and for being there for me through my times of trouble.

I have gained a lot. I had a ghastly accident in 1972, for which I was rushed to London for treatment. And when I returned, I went back to London for a musical show. While in London, I recorded an album, London Special. Since then, I have been in the limelight.  I have seen a lot. Those who know me will appreciate the fact that I am alive today.

What have you seen?

After the accident, people who saw me didn’t believe I could be alive today. I looked like a monster.

Which of your albums is your favourite?

I can’t say I love one more than the other. But I can say Give Us This Day, London Special, Aditu Ede and Won N’reti Eleya are some of the best.

Nobody. But when I started, I was playing the Ebenezer Obey kind of music. I later changed my style with the release of the Aditu Ede.

Why is the reason for copious use of proverbs in your song?

I do a lot of research and I ask questions from elders.

At what point in your career would you say you had the best set of band members?

I have always been having good sets of band boys. For example, Shina Peters was a good guitarist when he was in my band. Segun Adewale was good singer. So was Oluwole Yellow and others.

Dayo was a good guitarist too.

It was alleged that you sent Shina and Segun Adewale out of your band because they rebelled against your authority. Is this true?

No. They decided to leave on their own.

But Segun Adewale said you sacked them.

I did not.  They left because they became swollen-headed. I decided to issue them a query and instructed them to sign a letter of undertaken, which they refused to sign.

Well let me put the record straight. They were coming late to shows and this was affecting the band. That was in 1976.

Do you pay them well?

They were very well paid. But I know that some enemies of progress advised them to quit. To God be the glory, I survived it.

How do you feel when Segun and Shina recorded their first album?

I was happy. To the best of my knowledge, they had recorded the album before leaving my band because the album was released a week after they left my band. They even sang one funny song Epo Ti Alakan Won N’se Fun Odun Mejo. But since my name was not mentioned, I did not have a reason to reply them.  I only said if what I was doing for eight years was in vain, I wouldn’t have taken them to London on my first trip.  I gave them the opportunity to travel to London for the first time in their life.

Did you envisage that they would split up?

No. But I’ve always known that “Ile ti a fi ito mo, iri nio wo” (a structure erected on flimsy foundation will will definitely crumble).

So you were happy?

No. But I knew that they were different personalities.

But you replied them in one of your albums…

I sang Asa Ti Dode Adie Wewe Ewo Inu Ago Lo (the hawk is in town so the chickens should go hide in their coop).

How strong was the belief in black magic by musicians of your era?

I believe in my Bible because I am an ordained pastor. The accidents that were regular in those days could be due to a number of factors; some of us could be drunk and at the same time, be driving.

There was a time you were arrested for drugs. How did it happen?

I was arrested in United States of America. But the drug was given to me by a friend, who I will refer to simply as Alhaji. I never knew what was in the bag he gave to me.

He gave it to me as luggage with a promise that he would take good care of me. And when I was arrested, I didn’t have the privilege of seeing him for about two years because he was also arrested and sentenced accordingly. On my own part, I was sentenced to 10 years in prison. After two years, a group of lawyers came to my aid and I was released. Back in Nigeria, I was jailed again because of the law operating here then.

Can you compare prison life in Nigeria and the US?

The American prison system reforms. That is why they call it reformation institution. But Nigerian prison system is horrible. If not for God, I would have died. In the US, we were treated specially to the extent that prisoner there often wants to remain in prison. All the same, prison life is not the best. I thank God that the experience is a corrective measure from God because if the journey had been successful, my friend would have introduced me to full-time drug peddling and I may not be alive to tell the story today.

Did you know that what Alhaji gave you was drugs?

No. I had never seen it in my life. What he told me was that I should carry the luggage and that he would reward me very well. I thought it was just a normal luggage because I was going to seek medical attention for my eye trouble. I believe that God kept me in prison for reformation and the lesson I learned from is that no matter your problems, you must be contented.

Is that why you became a pastor?

Yes.  Though I had become born-again before going to prison, I took God more seriously while in jail in America. That was what kept me afloat in prison back here. On my return, I went to Bible school at the World Bible Church in Lagos.

As an ordained pastor, do you perform at social engagements?

Being a pastor does not mean I should stop performing. I am still active on stage. In fact, I will be playing at an engagement in Lagos next month.

When do you plan to retire?

I will play till thy kingdom come because I have not seen any musician that quit active stage performance. And at 70, I am still active. I don’t have any ailment. I recorded an album, Adekunle At 70, for my birthday celebration.