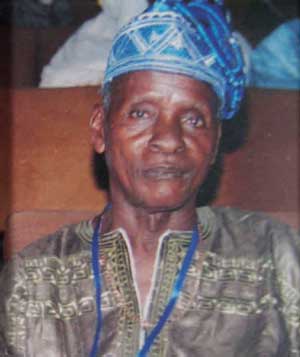 Late actor,  Akintola Ogungbe, 78 who died on Wednesday left behind 20 wives and about 50 children.

P.M.NEWS gathered  that the late actor who started his acting career in a dancing theatre troupe which he founded, got married to the women who were used as dancers and actresses. The troupe, associates recalled, used to move from one town to another to perform shows.

Investigations revealed that his wives, scattered all over the country, have been  visiting the Ogungbe’s compound in Iberekodo area of Abeokuta, Ogun State, southwest Nigeria to condole with the family.

P.M.NEWS gathered that during the dancing theatre days, the late Ogungbe had the privilege of training popular actors like Jimoh Aliu, a.k.a. Aworo, the late Ishola Ogunsola, a.k.a. I Show Pepper, Charles Olumo, a.k.a. Agbako and many others.

As the Dele Odule-led planning committee begins work on giving the veteran actor a befitting burial, the Governor of Ogun State, Senator Ibikunle Amosu, has pledged his support to the committee.

Amosun’s promise of support was contained in a message sent to the Ogungbe family through the Commissioner for Culture and Tourism, Yewande Amusan, who paid the Ogungbe family a condolence visit on behalf of the governor yesterday. Ogun State Attorney-General and Commsissioner for Justice,  Wemimo Ogunde, SAN and other prominent individuals have also visited the Ogungbes.

P.M.NEWS gathered that the Odule-led committee has tentatively fixed February 2013 for the late Ogungbe’s burial.