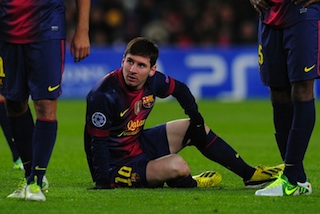 Barcelona star Lionel Messi reassured fans he was feeling good after taking part in light training on Thursday despite being stretchered off with a knee injury during the 0-0 draw at home to Benfica in the Champions League.

The 25-year-old worked in the gym as his team-mates trained outside and afterwards said he still had a chance of playing in the La Liga clash against Real Betis on Sunday.

“I feel fine, but I don’t know yet if I will be available for Sunday,” Messi said at a promotional event at the Nou Camp. “I’ll see. I am grateful for all the messages of support I have received.”

Messi came on in the 58th minute of Wednesday’s tie only to collide with Benfica goalkeeper Artur Moraes six minutes from time in a match that was meaningless to Barcelona but where he was chasing his 85th goal of the calendar year which would have equalled Gerd Mueller’s long-standing record.

The sight of their star player being stretchered off the pitch silenced the Barca fans, but there was relief soon after with the club confirming the injury was no worse than a bruised left knee.

“On the stretcher, I thought the worst, of the pain torturing me, of being off the pitch for a long time,” he explained, acknowledging: “there is always a risk of injury when you walk onto the pitch.”

“Once I was in the dressing room when the doctors examined me, did tests and ruled out the possibility of a serious injury, I was much calmer,” he said.

“Sincerely I thought it was the last ball that I would kick in a long time,” said the Argentine star, adding that despite the knock his only thought had been of scoring.

“Despite the pain, I tried to score … in reality I was thinking the worst, but I saw the ball there and I wanted to play,” said Messi, who stressed that his desire to break Mueller’s record had no influence on his game.

“Mueller’s record isn’t an obsession for me, but it would be good, because it’s been there for a long time.”

And he dismissed any notion that his absence would have any effect on the league leaders.

“With or without me, the team will continue in the same way. There are enough players left,” he said.

Earlier a statement on Barcelona’s website calmed fears over the player’s injury after reports that Messi could be out of action for two weeks.

“Leo Messi who played last night, worked out in the weight room today,” the statement read.

“Messi was the victim of a bruise on the outside of his knee and will undergo further tests to determine the exact damage.”

Barcelona have three Liga matches before the end of the year, including a top of the table clash at home to Atletico Madrid on December 16, before their final match of the year on December 22 when they travel to Valladolid.