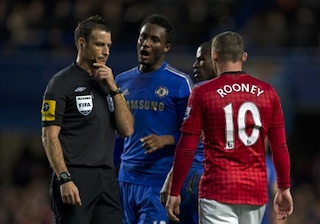 Mikel was reported to have stormed into the officials’ dressing room at Stamford Bridge after the Premier League match in October following accusations that referee Mark Clattenburg had racially abused the Chelsea midfielder.

But the FA decided there was “no case to answer” over the allegation Clattenburg said “shut up you monkey” to Mikel and the official was clear of all charges.

Mikel had admitted using threatening and/or abusive and/or insulting words and/or behaviour in the official’s changing room at the end of the game at Stamford Bridge on October 28, said the Football Association.

“Chelsea’s John Obi Mikel has been given a three-match suspension to begin with immediate effect and fined £60,000 following an Independent Regulatory Commission hearing today,” said an FA statement.

“But for that factor the suspension would have been significantly longer. Subsequently The FA investigated the allegation that the referee racially abused the player and found that there was not a case for him to answer.”

Mikel’s suspension will take effect immediately, ruling the Nigeria international out of domestic duty until December 26.

The 25-year-old, who signed a new five-year contract with Chelsea on Wednesday, will miss Saturday’s trip to Sunderland, but will be available when his club compete in the Club World Cup in Japan next week.

With Mikel also likely to be absent on African Cup of Nations duty in January, Chelsea interim manager Rafael Benitez has started looking for cover for the Nigerian from within his squad.

Benitez employed David Luiz in midfield during parts of the 6-1 Champions League win over Nordsjaelland on Wednesday and admitted he was prepared to use the Brazil defender further up the pitch to provide an alternative to Ramires and Oriol Romeu in the holding role.