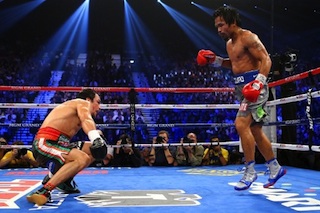 File photo: Manny Pacquiao knocks down Juan Manuel Marquez in the fifth round in December 2012

with a right hand with one second left in the sixth round to win their welterweight fight Saturday at the MGM Grand Garden Arena in Las Vegas.

The 39-year-old Marquez sent Pacquiao face first to the canvas, giving him his first victory over the Filipino star in the fourth fight of their epic rivalry.

Marquez ended the fight with a overhand right that hit Pacquiao flush, sending Pacquiao down hard. Pacquiao landed under the ropes and lay there for a couple of minutes before getting up and returning to his corner.

The shocking ending stunned the crowd of 16,348 as Marquez had held his own in their first three fights but failed he to get a victory and had never knocked down Pacquiao until Saturday night.

There was no title on the line but plenty of pride as four division champ Marquez showed he was willing to go toe-to-toe with Pacquiao even after getting knocked down in the fifth round of this fight.

He knocked Pacquiao down for the first time in 39 rounds between them in the third round with a right hook over the top.

But Pacquiao kept coming and Marquez appeared to be heading to his third defeat to Pacquiao after he was bloodied and knocked down in the fifth.

Pacquiao came out attacking from the opening bell throwing lefts over the top of Marquez’s gloves.

Pacquiao was the aggressor early, landing a solid left halfway through the second that jolted Marquez.

By the time the sixth round started Marquez looked a bloody mess, bleeding from a cut over his nose and from the mouth.

The fighters set a blistering pace, making it look unlikely this fight would go the distance as their three previous fights had.

Both the third and fourth rounds ended with the boxers slugging it out in the centre of the ring.