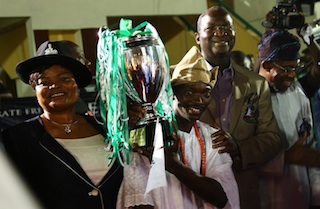 Team Delta, that won a total of 288 medals; 116 gold, 97 silver and 75 bronze, were presented with the Gen Yakubu Gowon Trophy at a colourful closing ceremony held this evening in Surulere.

Rivers State, that won the last edition of the festival held in Port Harcourt in 2011, came second with 76 gold, 71 silver and 71 bronze to garner a total of 218 medals.

At the presentation ceremony, Delta State governor and his wife, Emmanuel and Deaconess

Uduaghan were on ground to cheer their team that came second at the last edition in 2011.

The closing ceremony, held to honour all participants from 36 states of the federation including the Federal Capital Territory, FCT, Abuja, brought the athletes together as a symbol of national unity.

Shortly after the trophy was handed over to the overall winners, the Flag of Unity was presented to Cross River State, that would host the 19th edition of the festival in 2014 in Calabar.

The Chairman of Eko 2012 festival, Adejoke Adefulire, who doubles as Deputy Governor of Lagos State, handed the flag to Governor Babatunde Fashola, who passed it to the Director of National Sports Commission, NSC, Patrick Ekeji, who finally presented it to Patrick Ugbe, the Cross River State Sports Commissioner.

Soon after the flag exchanged hands from Lagos to Cross River State, this year’s festival was formally declared closed by President Goodluck Jonathan, who was represented by Nigeria’s Sports Minister, Bolaji Abdullahi.

Abdullahi praised Governor Fashola and his people in Lagos State for organising the festival this year.

The host governor, Fashola said Lagos was glad to finish third at the Games.

“Our joy as hosts of Eko 2012 National Sports Festival is that many young athletes were discovered at the games. They are the overall winners by my estimation because these are the future of Nigerian sports,” Fashola said.

The Lagos governor added: “I wish all the 12,000 athletes and officials journey mercies as you head back to your states.”