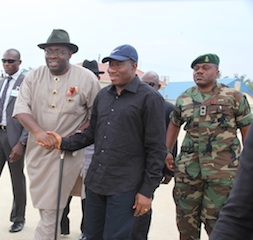 Stakeholders of the Peoples Democratic Party, (PDP), in Bayelsa State have taken a resolution that President Goodluck Jonathan remains the leader of the party in the state.

The decision was reached following a motion by Governor Seriake Dickson declaring total support for President Jonathan as leader of the party in the state at an expanded caucus meeting of members of the PDP at the Government House Castle, Yenagoa.

The motion was supported by the former civilian Governor of the state, Chief Diepreye Alamieyeseigha and adopted by about 28 members of the party’s caucus after a voice vote initiated by the lawmaker representing Bayelsa Central Senatorial District, Senator Emmanuel Paulker.

In his speech, Governor Dickson said the meeting marked a

beginning in the state PDP devoid of what he termed, “mindless acrimonious divisions” between Bayelsa based politicians and those at the national level.

The Governor said the development was unhealthy and projecting the state in a bad light in spite of God’s mercy upon the state, noting that the expanded caucus meeting was convened for members of the party to close ranks and form a formidable bloc of support at the state level.

According to him, “the most important challenge Bayelsa State has had to contend with is the issue of mobilizing support for President Jonathan, which is why we want to convene this meeting once every quarter. Commenting on the forthcoming local government election, Hon. Dickson urged members of the party not to “say or do anything to threaten the peace and tranquility that has brought respect to our state.”

The State Chief Executive also noted that such meetings would afford him the opportunity of rubbing minds and exchanging ideas with them on development issues, particularly in the area of education.In his remarks, President Goodluck Jonathan expressed gratitude to Governor Dickson for his invitation to attend the meeting, promising that since it would be held quarterly, he will endeavour to be part of subsequent meetings. President Jonathan who stressed that politics ought to be seen as tools for the development of the people and service to fatherland, said up until now, he could not fathom what went wrong during the last expanded caucus meeting of the PDP in the state.

Describing Chief Alamieyeseigha as his benefactor in politics, the President called on the political class to learn to be supportive of one another and put aside their grievances in the collective interest of the state rather than creating undue tension in the polity.

President Jonathan who also bared his mind on the selection of political candidates for elective positions, was quoted as saying, “I don’t want to be in Abuja and be seen as influencing political contestants; I will not condescend to get myself in the selection of candidates, am not interested because it won’t be fair since leadership is all about hierarchy.

The number one citizen of the country further underscored the need to respect the hierarchy of power in order to build a strong leadership structure, stressing that he would not stay in Abuja and dictate but it would be alright if he is consulted.

In a welcome address presented by the state PDP Chairman Colonel Sam Inokoba (Rtd), announced that the party’s intention to organize a PDP summit involving all party officials at the State, Local Government and Ward levels as well as leaders of the party in government.

According to him, the party will also launch an appeal fund for the building of a permanent party secretariat, which would be christened, “the Goodluck Jonathan Complex” and 8 party secretariats at the local government headquarters.

On strategies for revenue drive and funding of the party, Colonel Inokoba stressed the need for all political appointees to pay the mandatory 5% monthly contributions from their salaries.

A minute silence was observed in honour of the younger brother of the President, Chief Meni Jonathan, who was laid to rest over the weekend at his hometown, Otuoke.