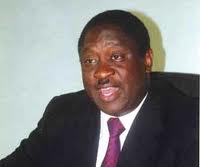 The trial of the embattled Managing Director of Bi Courtney Ltd, Dr. Wale Babalakin by the Economic and Financial Crimes Commission, EFCC, over an alleged N4.7 billion fraud took a new twist today as his lawyer, Chief Ebun Shotunde (SAN) announced his withdrawal from the matter.

Justice Onigbanjo promptly granted his request for withdrawal and stood the matter down as the EFCC prosecutor, Mr. Rotimi Jacobs, SAN, had earlier requested that the matter be stood down as he was attending to a sister case filed by Babalakin at the Federal High Court, Lagos.

Meanwhile, a Federal High Court sitting in Lagos, Southwest Nigeria this morning adjourned till noon tomorrow an application for the judicial review of the constitutionality of the charges filed against the Chairman and Managing Director of Bi-Courtney Nigeria Limited, Dr. Bolanle Olawale Babalakin, by the Economic and Financial Crimes Commission, EFCC.

Counsel to Babalakin, Mr. Wale Akin told the court that the business of the day is for the court to hear his client’s application as the preliminary objection filed by the EFCC is not ripe for hearing, because he has not filed a counter-affidavit to that and he has up till tomorrow to do that.

Mr. Jacobs objected on the ground that the matter was supposed to be heard expeditiously because when he was served with court process on 5 December, he promptly filed his preliminary objection and counter affidavit on 6 December and served Babalakin same day.

After a protracted argument, Jacobs conceded that Akin can file his response so that the matter can go on tomorrow.

Based on this mutual agreement, the presiding judge, Justice Mohammed Idris adjourned till tomorrow for continuation of the hearing.