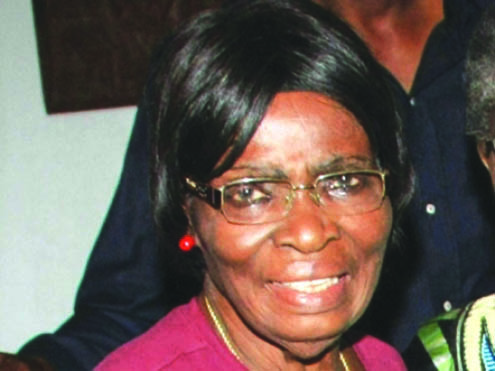 Professor Kamene Okonjo, mother of Nigeria’s finance minister, has been freed by her abductors.

The retired 82 year old professor of sociology and Queen mother of the Delta state town of Ogwashi Ukwu, was kidnapped Sunday by 10 armed men in her husband’s palace when she came out to serve drinks to workers.

Reuters reported her release this morning, quoting a security source.

“She has been released now by her captors and she is at home,” said the source, who had confirmed Kamene Okonjo’s kidnapping on Sunday in Delta state.

The AFP quoted Frank Mba, spokesman of the Nigeria Police as also confirming the report:

“She has been freed,” police spokesman Frank Mba told AFP. “She is in good health.” He declined to provide further details other than to say that she was freed earlier Friday.

The minister’s spokesman issued a statement confirming the release, but also without providing further details.

One local television station reported that she had been dropped off from a motorcycle on Friday morning, but the information could not be immediately confirmed.

It was not clear if the Okonjo family had paid a ransom before the 82 year old woman was released this morning or whether the release was by the efforts of security men.

The police had missed a 24 hour ultimatum given by the Delta State governor, Dr. Emmanuel Uduaghan on Monday. On Wednesday, the army authorities swooped on a nearby village and arrested 63 suspects in connection with Kamene Okonjo’s disappearance.

The 63 people were arrested in Ozanogogo town, Ika South local government area of Delta State by soldiers of 4 Brigade of the Nigerian Army .

Over 30 soldiers stormed the town in the evening hours when the men of the small community were returning from their various farms and other places.

Jerry Opute who spoke to P.M. NEWS on phone, lamented the indiscriminate arrest of citizens of his community, which he said has led to people deserting the town and other neighbouring communities.