Oshun: Why Nigeria's Southwest Must Be Integrated 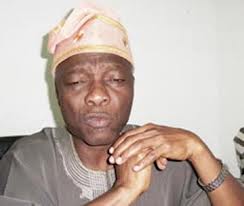 The national chairman of Afenifere Renewal Group, ARG, Mr Olawale Oshun, has said that development, especially among the Yoruba people is a must, not negotiable and an irreducible minimum, describing regional integration as a philosophy, system and structure that reflect and shape the strategies of governments of Western Nigeria.

He said the subject under consideration is the planned integration of the economic activities and development considerations of all Yoruba speaking states in Nigeria, which carries with it, the intent to quicken its rate of growth, by deepening their infrastructure facility and capacity and re-awaken the healthy and positive competitive spirit that hitherto characterised the relationship of the federating regions in the country prior to military usurpation of 1966.

“For Western Nigeria and Yoruba people, integration is a philosophy, system and structure that reflect and shape the strategies of our governments. Integration acts as a spur to greater efficiency, productivity and competitiveness. I need to emphasise though, that integration is not an end in itself, rather, it is a process to support developmental growth strategies, greater social equality and democratisation.

“We will integrate to ensure good governance as the leadership of the states will be expected to be more effective, more competitive and better equipped. We will integrate to allow for the establishment of common sets of development indicators. Development, especially among the Yoruba people is a must, not negotiable and is an irreducible minimum,” he noted.

The Action Congress of Nigeria, ACN, chieftain further said,”Why would we compromise on a good road network from Oyo to Akure? Why would we even debate the need for a child in Ado to be guaranteed the same quality and standard of education when his/her parents relocate to Osogbo? Why would there be an issue if I am assured that if I am ill in Ijebu-Igbo, I am assured of good primary and secondary health care I would have accessed if I stopped over in Epe? Why can’t I be comfortable in the knowledge that my older relatives in Abeokuta have a good welfare and social care packages, same that I would access if I retire in Lagos? These form the spirit of integration, these are its heart and soul.

Dipo Famakinwa while giving an overview of the strategy roadmap of the Development Agenda For Western Nigeria, DAWN, said it provides the leeway to harness in a coordinated manner, current efforts being made at creating and re-defining a new development process that would leapfrog the economies of the Western Region of Nigeria, and improve the well-being of the people.

“Across the region, and happily with no exception, there are big games and big results locally. The process and character of governance are already being re-engineered. The people are being put at the centre of development. The Awolowo development paradigm is active and alive.

“Indeed, one can say that the great march is afoot. Elements of constructive and competitive communalism are already showing up. For the first time in a long time, we can see great strides being made at the state levels to re-enact strong and virtuous leadership character, create the environment for peace and security, improve the social sector, especially education and health, create employment, develop physical infrastructure, enhance the logistics apparatuses for trade and commerce, change the face of our cities with a view to making them purveyors of urban commerce and investment, improve the environment for meaningful rural enterprise, refocus the youth, and re-channel creative energies. Of course also, there are landmark initiatives in agriculture and tourism development, and if current efforts are sustained, the Region will not be the same again,” he intoned.

Famakinwa said the nature of the Nigerian federalism, which in every practical manifestation is unitary and heavily centralised, makes development possibilities far- fetched, adding that Nigerians need to sit together to re-examine and resolve the national question once and for all, and this, he said, is a sine-qua-non for peace, progress and prosperity.

“The sentiment in the Southwest is that the whole world is leaving us behind. We are certainly not maximising the latent resources, including the human talent that abound liberally within the region, and we cannot continue to put the lives and well-being of about 40 million people in jeopardy, under an illusory envelope that does not serve us, and that we, as a people, have continually opposed as an imposition.

“We believe that regional autonomy would allow us to better define our own development priorities, and harness our resources the best way we choose. Incidentally, this is at a time the world is looking in the direction of Africa for agriculture and nutrition, and for other commercial possibilities that the fast-urbanising Africa presents. Africa is being reckoned as the new frontier, and the opportunities beckon.

“Of the top 20 cities that McKinsey has identified as growth hot spots for companies targeting young, entry level consumers, Lagos and Ibadan, two key cities in the Southwest of Nigeria are included in the list, which also has urban centres such as Dar es Salaam, Tanzania;  Ouagadougou, Burkina Faso; Kampala, Uganda and Lusaka, Zambia. There is, therefore, before us, the urgency to prepare the  region for global competitiveness,” he averred.

He said that DAWN which encapsulates the regional integration agenda of the Southwest, offers a response to many of the challenges, and also create the concerted and consolidated strategy for marching forward as a region with obvious strategic assets, historical advantages and communal affiliations, which need to be urgently harnessed.

“The Agenda itself is constructed around well-defined pillars of development to pursue clear attainment targets in economic development, social and human development, infrastructure development, as well as building inclusive institutions for political and economic governance. Regional actions centred around the pillars of development will promote collaborative efforts in developing a unified cultural core, rebuilding our collective sense of purpose, branding Western Nigeria as a distinct and progressive sphere of opportunities built around result-oriented framework of actions, launching an agricultural revolution roadmap; building regional competitiveness around innovation, science and technology, developing education to be able to deliver quality human capital, skilled workforce, including technical and vocational as well as specialised capacity in science, technology and engineering; launching series of vigorous youth development programmes to arrest the looming demographic time bomb, leveraging Diaspora power maximally, harnessing positive migration, and guarding against damaging proclivities from within and outside.

“DAWN is not a secessionist agenda, but an unapologetic federalist-oriented case for regional development,” he said.