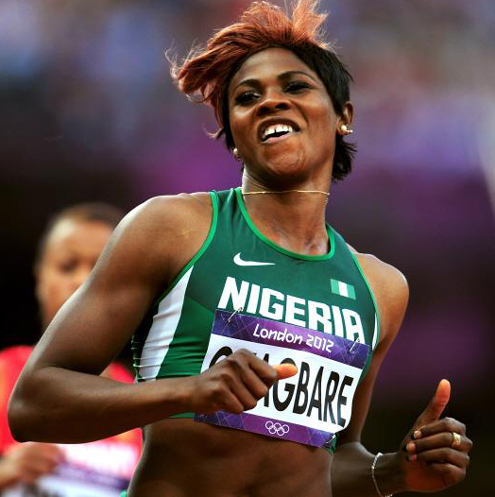 The London 2012 Olympic Games, which fell into the third and fourth quarter of the outgoing year under review, will go down in history as the worst for Nigeria and the Athletics Federation of Nigeria as the athletes returned home with not a single medal.

It would also remain a mirage to a few of the athletes that were described as medal prospects but who eventually fell, dashing the hopes of over 150 million Nigerians.

Blessing Okagbare, a female athlete raised the bar with her performance during the heats, but when it mattered most she failed to live to expectations as she came last in the 100m female final.

Okagbare kept her high class profile to the 2012 Olympics, though at the Africa Championships, she showed signs of weakness by surrendering the 100m gold to Gabonese Zang Ruddy Milama in a race she was expected to win.

She later reassured Nigerians that she is a candidate for a medal when she ran her best time ever at the Crystal Palace meet in London. She did 10.99 seconds it was the first time she was breaking the 11.00 seconds barrier in her career.

However, at London 2012, she could not replicate the form that made her a medal hopeful.

Another medal prospect who fumbled at the Olympics was Ajoke Odumosu in the Women’s 400m hurdles, Odumosu had been in blistering form going to the Olympics but she couldn’t get into the medals zone, thereby adding misery to Nigeria’s expectation.

It was however at the Olympics that she improved her personal best to 54.40 seconds during the semi-finals.

The tales of woe continued for Team Nigeria’s Women 4x400m at the Games as the time they returned could not earn them a place considered good enough for medals.

It was obvious that the ladies will not get close to the medals zone because of their ranking going into the Games. They were ranked ninth in the top 16 list of qualifiers with a season best of 3.28.77 achieved by Abinuwa Endurance, Omolara Omotosho, Bukky Abogunloko and Margaret Etim at the last African Championships in Port Novo, Benin Republic.

Ameachi Morton was touted to clinch a medal for Team Nigeria in the 400m Hurdles men but couldn’t as he was disqualified.

Born of a Nigerian mother and a Caribbean father, Morton made a dramatic improvement to his career when he ran a personal best of 48.79 seconds, which met the Olympic qualifying standard.

He was the 2012  400m hurdles gold medallist at the NCAA Championships and the African Championships. He has a personal record of 48.79 seconds for the event but for the injury he would have returned with a medal.

In the Men’s 100m, Obinna Metu who is Nigeria’s fastest man had the best of preparations as he trained with the world’s fastest man, Jamaican Usain Bolt in Jamaica but he couldn’t pass the quarter-final level ending Nigeria’s hope of clinching a medal.

It was the same for Ogho-Oghene Egwero and Peter Emelieze, who ran 10.38 and 10.22 respectively but the timing was not good enough to make them qualify from the quarter-finals.

Unknown Selim Nurudeen was also regarded as a medal material in the Men’s 110 hurdles but crashed out in the heat with a time of 13.51.

With the season already off, it is expected that the AFN and the National Sports Commission, NSC would work out modalities on how Nigerian athletes can perform better in international competitions.