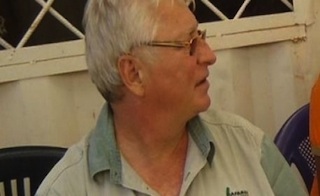 Frances Colump: was in Nigeria on relief duty

Move over, Boko Haram. A new islamic terrorist group operating on Nigerian territory, has claimed responsibility for the kidnapping of a French engineer, Frances Colump, in the Nigerian village of Rimi, near Katsina, the capital of Katsina state.

The group, called Ansaru, with affiliations to Boko Haram and

the Malian Ansar-Dine group that seized control of Northern Mali since March, made the claim today, citing France’s push for military intervention in Mali as a justification.

Ansaru “annouces to the world, especially the French government, that it was responsible for the abduction of engineer Francis Colump…63, working for the French company Vergnet,” said a statement emailed to journalists.

“France’s major role in the (planned) attack on the Islamic state in northern Mali,” was listed as a cause for the abduction.

Colump, 63, works for Vergnet, which has a wind power project in Katsina.

Late last Wednesday some 30 gunmen stormed the workers’ residence in Katsina state where Colump was staying. They killed a security guard and a neighbour during the raid.

“The reason for his kidnap is the stance of the French government and the French people on Islam and Muslims,” the statement said.

The group specifically pointed to “France’s major role in the (planned) attack on the Islamic state in northern Mali.”

It also cited France’s “law outlawing the use of Islamic veil by Muslim women, which is an infringement on religious rights.”

Paris has backed plans to deploy a west African force to northern Mali to flush out the Al-Qaeda-linked Islamist groups who took control of the vast desert territory earlier this year. Last year, it passed a law banning the wearing of the full-face veil.

Ansaru is less well known than Boko Haram, which is waging a deadly insurgency across northern Nigeria that has killed hundreds since 2009. Boko Haram has said it wants to create an Islamic state in the north.

The two groups are known to have ties but are seen as independent.

In November, Britain’s interior ministry identified Ansaru as a “Nigeria-based terrorist organisation” and declared membership or support for it illegal.

The group’s full name, Jama’atu Ansarul Muslimina fi Biladis Sudan, is roughly translated as “Vanguards for the aid of Muslims in black Africa.”In November, Britain’s interior ministry identified Ansaru as a “Nigeria-based terrorist organisation” and declared membership or support for it illegal.

The group is thought to have ties to Boko Haram, Islamist insurgents who have killed hundreds in northern Nigeria since 2009.

Ansaru was suspected of involvement in the kidnapping of a British and an Italian in northern Nigeria last year.

It was not clear if the Ansaru group was acting alone or in collaboration with Mali’s
Ansar-dine, led by Iyad Ag Ghaly, one of the most prominent leaders of the Tuareg rebellion in the 1990s.

Ghaly is suspected to have ties with Al-Qaeda in the Islamic Maghreb as well as other splinter Islamist groups which is led by his cousin Hamada Ag Hama. Ansar Dine has imposed strict Sharia law in the areas of Mali under its control.

The Agence France-Presse reported that Ansar Dine claimed to occupy the towns of Tinzaouaten, Tessalit, and Aguelhok, all close to the Algerian border, and that they had captured at least 110 civilian and military prisoners. France accused the group of summarily executing 82 soldiers and civilians in capturing Aguelhok, describing the group’s tactics as “Al-Qaeda-style”.

Among its members are Nigerians, Algerians and Malians.