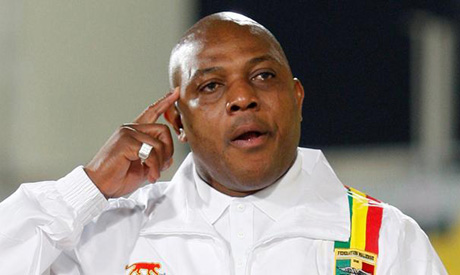 Super Eagles Coach, Stephen Okechukwu Keshi is excited about the prospect of leading his Nations Cup bound squad against Catalonia of Spain in an international friendly match on 2 January, 2013.

The match against the Spanish side, according to Keshi, will bring out the best in the Eagles, who will begin the last phase of their preparations for the African Cup of Nations in Faro, Portugal on Friday, 28 December, 2012.

“I hear that 10 players from Barcelona will be part of the team that will confront the Super Eagles. That is great news and it’s an opportunity for them to show that they have the capacity to play against the best footballers in the world,” Keshi told journalists at the Federal Capital Territory, FCT in Abuja, Nigeria on Boxing Day.

When asked to predict how many goals his team would likely concede against the star-studded Catalonia, that would parade Spanish players such as Gerrard Pique, Victor Valdes, Cesc Fabregas and Iniesta to mention just a few, Keshi said: “The scoreline may not matter at the end of the day, but I am sure the Eagles will not disappoint Nigerians.”

The Nigeria coach, who gave a comprehensive overview of how their training went ahead of the 2013 AFCON, said the home-based stars gave a good account of themselves during their camping in Abuja.
He revealed that new Warri Wolves acquisition, Chibuzor Okonkwo may not be part of the squad to the Faro camp because he does not have a valid Shengen visa for the trip.

Keshi also revealed that Kano Pillars’ Papa Idris and Enyimba’s Henry Uche have been offered opportunities to hustle for shirts at the Faro camp, and should be travelling with the team on Thursday.

On his goodwill message to Nigerians before their departure for AFCON, Keshi urged Nigerians not to cease praying for the team, as he foresees the Eagles putting smiles on the faces of the numerous soccer fans in the country.

“We need their support and prayers and hopefully we will put smiles on their faces at the end of the championship in South Africa.”