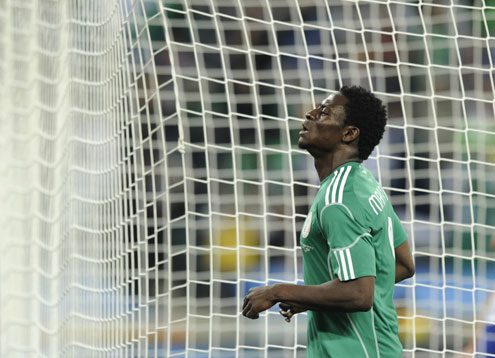 Obafemi Martins, Levante forward, could be called up into Nigeria’s provisional squad for the 2013 Afcon, according to Supersport.

With doubts hovering over the presence of Newcastle United striker, Shola Ameobi for the Africa Cup of Nations, supersport.com reported that Nigeria’s head coach, Stephen Keshi is turning to Martins.

A top official of the Nigeria Football Federation (NFF) revealed to supersport.com on Friday that the name of the former Rubin Kazan striker popped up as a possible replacement for Ameobi, who has been ruled out of the Afcon by Newcastle manager, Alan Pardew.

“I can tell you one-on-one not as a board member of the football federation that Obafemi Martins is being considered to replace Shola Ameobi. The coach (Keshi) has spoken about him as he doesn’t want the distraction of Ameobi, who is yet to decide whether he will be part of the Nations Cup or not.

“But we will still push our case before Fifa because we have the rights to have our players in the squad to a major championship like the Nations Cup which the world soccer governing body recognises. In the event of Ameobi not turning up, the coach will look at other options and Obafemi (Martins) is top on that list,” said the NFF official.

Ameobi is reported to have a clause in his contract that could stop him from taking part at the Afcon in South Africa next year.

But the Nigerian FA has quoted Article 31 (1) of the Fifa statutes and has said it will invoke the five-game suspension on the 32-year-old striker and Newcastle should he be blocked from taking part in the Afcon.