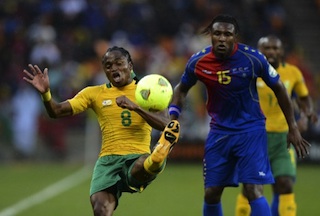 Hosts of the 2013 African Cup of Nations, AFCON, the Bafana Bafana of South Africa ended their opening match in a barren draw against Cape Verde Saturday evening.

The encounter, which left South African fans on the edge of their seats at the Soccer City Stadium in Johannesburg, saw Cape Verde keeping a clean slate in their first ever Nations Cup appearance.

The Bafana Bafana began the tension-soaked tie with an early incursion into Cape Verde’s rear, as Siphiwe Tshabalala went wide and attempted to cut in from the right flank.

But Tshabalala’s dangerous move was halted by Nivaldo, who brought him down, forcing a second minute foul. Tshabalala floated the resultant free kick deep into Cape Verde’s box, but the effort was wasted.

A worried Coach Gordon Igesund of South Africa, was on his feet all through the opening match, as he urged his team to rise to the occasion, but their opponents were more determined, as Mendes and Platini attempted but failed to score against goalkeeper Khune. Their rugged approach to the tie almost paid off within the first ten minutes, but Mendes’ shot went wide.

His strike, which was the first shot at goal in the tie, however woke the South Africans from slumber, as they fought for more ball possession.

Led by skipper Khumalo from the defence, the Bafana midfield combined well and fed Mphela, Majoro and Tshabalala upfront, but the water-tight defence of Cape Verde did not allow the hosts to score.

In the 13th minute, Majoro conjured a free kick for South Africa when he dived, but Tshabalala played the ball into waiting hands of Cape Verde goalkeeper.

Cape Verde had an opportunity to score in the 16th minute, when Platini had the ball in the six yard. He was face-to-face with the keeper, but his feeble shot missed target.

Nivaldo also had a chance in the 20th minute, but missed a bicycle kick in the box.

Mphela, who found it difficult to break through Cape Verde’s rear, missed another chance when he wasted a pass from Tshabalalas’s free kick about 33 minutes into the tie.

Platini, who also wasted some chances in the match opted to play the ball wide instead of cutting it in for an easy jab-in by his fellow strikers as the hostility approached the 40th minute mark.

The first half ended 0-0, but both teams came stronger into the second half with more misses.

South Africa came out more, but their strikers were shy in front of the goal area.

Substitute, Chabangu missed a goal scoring opportunity when he had the ball in the 50th minute, while the hosts took turn to waste more chances in the match.

A desperate Platini, who wanted to beat Bafana goalkeeper, Khune to the ball, pushed him down and the referee gave him a deserving yellow card for his action.

Coach Igesund introduced Serero and pulled out Tshabalala, while Cape Verde coach responded by
substituting Platini with Tavares, yet, the changes did not produce any goal from both teams.

Goalkeeper Khune’s fitness was really tested in the 73rd minute by Nivaldo, whose header from a corner kick, was going into the net before it was slightly parried into touch.

Nivaldo was pulled out for David, but Cape Verde did not find the back of the net, just as the last minute efforts by Mphela and skipper Khumalo equally missed target.

In the second match, Angola and Morocco also played a goalless draw.