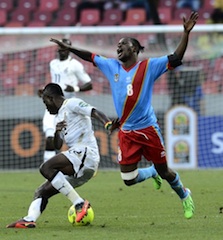 
The Black Stars of Ghana Sunday evening settled for 2-2 draw with DR Congo in their African Cup of Nations, AFCON, Group B opening match at the Nelson Mandela Bay Stadium in Port Elizabeth.

Agyemang Badu and Kwadwo Asamoah scored both goals for Ghana in the 39th and 46th minute respectively, while Tresor Mputu and Dieumerci Mbokani equalised for the Congolese side in the 53rd 68th minutes respectively.

Unlike the opening match of the tournament between hosts, South Africa and Cape Verde, which did not produce a single goal on Saturday, the encounter between Ghana and Congo recorded four fantastic goals, as both teams fought for ball possession from the blast of the whistle till the end.

The Ghanaians came out and took the ball to their opponents barely four minutes into the tie, but skipper Asamoah Gyan was ruled offside in what appeared like a controversial call from the centre referee Daniel Benett.

As first half actions continued, both teams fought for ball possession more in the midfield, but DR Congo had an upper hand with Tresor Mputu dictating the pace, before Ghana’s Kwadwo Asamoah won the ball for his team.

Congo came close to scoring through Mputu when he ran into Ghana’s vital area in the 13th minute, but his effort struck the crossbar creating an early scare for the Stars.

In the 15th minute of the clash watched by a handful of fans, Lomana LuaLua fired from inside the 18-yard, but his shot was stopped by Ghana’s goalkeeper, Fatau Dauda, who parried the ball with his finger tip.

Despite the array of stars in the Ghanaian squad, the Congolese players were not humiliated, as they fought for ball possession and attacked Ghana’s defence at will.

About 20 minutes into the game, the Black Stars adopted a new approach, as Gyan went upfront as a lone striker but the Congolese did not lose their balance.

Gyan and Badu stepped up their attacking moves and came close to getting the curtain raiser on the half hour mark. Gyan even came face-to-face with the Congolese goalkeeper Robert Kidiaba, but his attempt went over the bar.

After creating many goal scoring chances but failed to find the back of the net, Ghana’s tenacity upfront paid off in the 39th minute, when Agyemang Badu scored from inside the six-yard, and sent their goal hungry fans into wild jubilation at the sparsely filled Stadium.

Kwadwo Asamoah got a through pass and dribbled his marker, moved with the ball before making an in-swinger, which beat the goalkeeper and Badu was on hand to slot in the first goal of the tournament.

With a goal ahead, Ghana regained their confidence and dictated the pace, but their opponents did not give up. Tempers began to rise, as the Congolese fought hard to get the ball from their determined opponents from West Africa.

Ghana’s Albert Adomah was at the receiving end of what later changed into a physical game, as he was booked in the 42nd minute when he reacted to a tackle on him. Ghana maintained their 1-0 lead till end of the first half.

On resumption of play, Kwadwo Asamoah increased the tally off a cross from Mubarak Wakaso, after the Congolese goalkeeper, Kidiaba failed to stop his blind header.

The Congolese side responded swiftly in the 53rd minute, by pulling a goal back when Mputu tipped the ball with outside of his right leg, leaving goalkeeper Fatau Dauda helpless as he watched the ball rolled into his net.

Mputu also came close to equalising in the 56th minute, but his shot was hurriedly cleared away by Ghana’s centre-back Jerry Akaminko.

The better part of the second half was played in the Ghanaians’ vital area, as the Congolese players forced their opponents to their rear.

Congo’s continued pressure on Ghana forced the Stars to commit a foul against Mbokani inside the box in the 68th minute, and the referee awarded a penalty, which Mbokani himself netted to leave the scoreline 2-2.

The Ghanaians fought back and tried to score more goals, but goalkeeper Kidiaba put up a brilliant performance as he denied Ghana on five occasions.

Wakaso again got a chance to give Ghana the winner in the 75th minute, when he volleyed the ball above the Congolese defence. The ball almost caught Kidiaba off guard, but the TP Mazembe goalkeeper raced back to make a vital save and earned his team a deserving 2-2 draw in the interesting match.