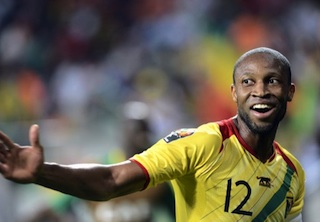 Niger goalkeeper Daouda Kassaly failed to deal with a high ball into his area and Keita slid home the match-winner in the 84th minute.

This was seven minutes after the former Barcelona ‘super sub’ had seen his left-foot shot from the edge of the box come back off the crossbar.

It was looking like the second game in Group B would end without any goals before Keita popped up to give his troubled country something to cheer.

After a cautious start by both teams, striker Cheick Diabate forced Kassaly to save his pile driver from distance.

Niger were content to soak up pressure and relied on long balls to launch counter attacks, using skipper Moussa Maazou on the right flank.

Defender Mahamadou N’diaye saw his header on 21 minutes come close and nine minutes later Kassaly fumbled another aerial ball, but Cheick Diarra could not control the loose ball in front of an empty net.

Mahamane Traore, who missed last year’s tournament due to injury, fired a shot from distance in the 38th minute which just missed the target.

Niger’s best first-half chance was from a goalmouth scramble during which striker Issa Modibo suffered a head injury as Mali goalkeeper Mamadou Samassa did well to block a Kofi Dankwa shot inside the six-yard box.

In the 53rd minute, Kassaly tipped Keita’s shot away for a corner and Samassa dived bravely at the feet of Modibo to foil the Nigerien.

Maazou rose above the Mali defence after 73 minutes only for his header to sail over and two minutes later a solo run also failed to break the deadlock.