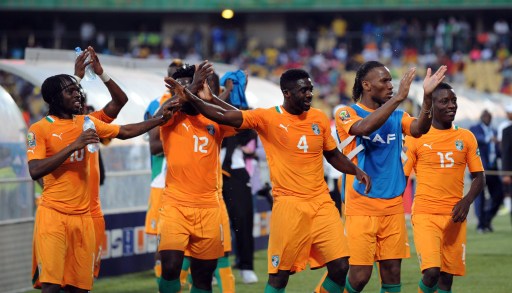 The Elephants of Cote d’Ivoire Tuesday evening scored an 87th minute goal to record a 2-1 win against the Hawks of Togo in a Group D match of the ongoing 2013 African Cup of Nations in South Africa.

It was Togo that began the much anticipated match on a bright note as they took the ball to the Ivorians right from the blast of the whistle with some good passes up front.

It came not as a surprise when as early as the second minute the Togolese side got a golden chance to score when their star player, Emmanuel Adebayor was through on goal via a mistake by Kolo Toure, but Boubacary Barry came to the Ivorians’ rescue as he collected the ball off Adebayor’s feet when he tried to dribble the goal keeper.

It was the turn of Cote d’Ivoire to mount their first attack in the 6th minute as Gervinho dribbled two players on the right side of the field but ended up losing the ball by the corner flag.

The Elephants of Cote d’Ivoire continued to dictate play after the early threat from Togo and opened scoring in the 8th minute through Yaya Toure.

The Manchester City midfielder got a deflected pass from Arsenal’s Gervinho and latched on the ball from14-yard that beat Togo’s goal keeper to record the first goal of the match.

The early goal allowed Cote d’Ivoire to settle down as Yaya Toure dictated terms in the middle of the pack, while the Togolese were pushed back to their own half of the field.

In the 20th minute, Togolese midfielder, Ayite took a long range shot but it went over the crossbar.

Just over the half hour, Ayite drove into the Ivorian box but his shot inside the box went wide.

A couple of rough tackles from Cote d’Ivoire’s Max Gradel and Togolese’s Vincent Bossou in the 33rd and 34th minutes respectively, resulted in the issusance ot two yellow cards by the centre referee.

A good interchange of the ball between Gervinho and Yaya Toure in the 40th minute created a chance for Gervinho down the right flank, but his cross from the touchline was a poor one and the Togolese keeper collected the ball safely.

In the 42nd minute, Togo once again drove forward through Djene, who played Gakpe down the left, but his cross was easily cleared by Kolo Toure.

With two minutes into the added time, Togo finally got their equaliser from the last kick of the first half, as their tormentor in chief, Ayite perfectly connected a corner taken by Serge Akakpo past the Ivorian goal keeper.

The centre referee brought the first half to an end after four additional minutes were played with the scoreline remaining 1-1.

Both sides began the second half with no change of personnel but it was the Ivorians who were keeping more of the ball unlike the manner they started the first half.

As early as the 47th minute, Togo’s Alaixys Romao got the first caution of the 2nd half after a careless challenge on Yaya Toure. The resultant free kick taken by Didier Drogba, from 35-yards out from goal flew over the crossbar.

Ivory Coast’s continued possession of the ball in the second half counted for nothing as they could not convert it to goal.

In the 59th minute, former Chelsea striker, Salomon Kalou came in for Max Gradel as Cote d’Ivoire’ tried to change their offensive formation, while Togo’s Dare Nibombe got the third caution for his team.

Both teams continued to look for the winning goal, as the Ivorian coach substituted Drogba, whose presence was not felt in the match, in the 73rd minute for Bony Wilfried, while Kossi Prince Segbefia replaced the Togolese’s goal scorer.

It was in the 87th minute that the winning goal finally came as Gervinho half-volleyed the ball into an empty net after a good delivery from Yaya Toure.

Togo almost recorded a late minute equaliser in the 93rd minute, but the Ivorians had their goal keeper to thank as he parried the ball with his finger tips for a corner kick to prevent Floyd Ayite from causing havoc from close range.

The referee blew the whistle for full time after four minutes of extra time played with the scoreline 2-1 in favour of Cote d’Ivoire.

Gervinho of Cote d’Ivoire was selected as Man of the Match.