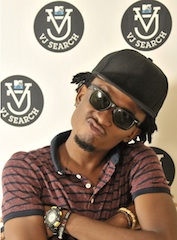 “I’m really speechless. I wish I know what to say right now,” Ehiz said a few minutes after he was adjudged the winner.

There were musical performances from Burna Boy, Ice Prince and Iyanya, after which the three finalists – Ada Ogunkeya, Kemi Owatemi and Ehiz were called on stage.

Tension mounted as guests held their breath as the winner was about to be announced since all the finalists were equally talented with individual skills.

But when Ehiz got the judges’ nod the whole audience was in agreement with his choice.

Ehiz, a graduate of Lead City University, Ibadan, where he studied Computer Electronics, is already living his dream as he told P.M.NEWS Entertainment Cafe that he’s destined and have been dreaming of presenting shows on a continental entertainment channel.

His parents were also present at the live recording and were very excited when their boy was announced the winner, especially his mom who informed and picked the nomination form for Ehiz.

“Back in school, I hosted parties, award nights and other gigs. There was a time I was hosting and I had to call on stage 2face Idibia. That’s one of my greatest experiences. MTV is a platform that has set standards…If I win, I’ll be making the brand really proud by working hard and focusing on my skills and the first thing I’ll do is take my mom out for dinner because I love her so much; she was the one that informed me about the MTV VJ search,” Ehiz told P.M.NEWS days before the finale.

Ehiz walked away with a N10m contract with MTV and a brand new KIA Cerato car.

The second edition of the MTV Base VJ Search has been nothing but exciting since it kicked off with auditions in December 2012.