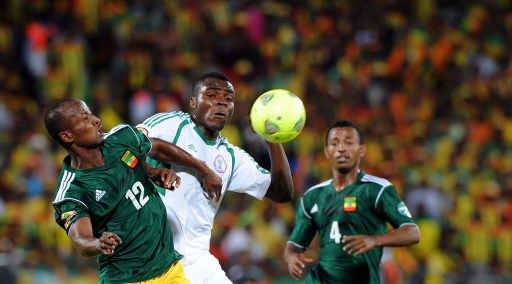 Nigeria's Echiejile struggles with the ball against Ethiopian players

Nigeria finally took its place in the elite league of African soccer, by qualifying for the quarter finals of the African Nations Cup, by defeating Ethiopia 2-0.

The two goals via penalties were scored by Victor Moses.

Zambia, the defending champions failed to make it, having earned only three points from three matches. It played a goalless draw in its last game with Burkina Faso, which qualified, along with Nigeria in the group.

Both Nigeria and Burkina Faso ended up with five points, but Burkina Faso led the group with goals advanatge, having netted four goals against Ethiopia in the second game of the group.

Nigeria had waited for the last game of the Group C to make its qualification, having wasted its lead in two previous matches, against Zambia and Burkina Faso, conceding late goals to

Nigeria started on a bright note as the Eagles made two incursions into the Ethiopians’ defence within the first two minutes of the match.
The first attack came through Celtic of Scotland defender, Efe Ambrose, who connected with a header a free kick taken by Victor Moses from the far left of the field, but his shot went over the crossbar.

In less than a minute afterwards, Chelsea’s Victor Moses took a free kick, about 35 yards outside the Ethiopians’ penalty box, only to be deflected by the opponents’ wall into the waiting hands of Ethiopian goalie.

Biyadglign Eliase of Ethiopia was the first player to be cautioned by the centre referee when he got yellow carded in the 21st minute after he fouled Emenike.

With over half of the first 45 minutes already played with no serious threat from the Eagles, the Ethiopians increased in confidence and after getting their first corner in the 17th minute, threatened the Nigerian goalkeeper, Vincent Enyeama in three quick successions but to no avail.

In the 33rd minute, Nigeria responded well to the Ethiopians’ threats as some swift exchange of passes among the attackers saw them go beyond Ethiopia’s defence for the first time in the match, but the final pass from Elderson Echiejile was too poor for Ike Uche to connect.

In the last seven minutes of the first half, caution was thrown to the dogs by both teams and this resulted in counter attacks from both teams.

Ethiopia got their second caution of the match in the 42nd minute when defender Degu Debebe was cautioned for a foul tackle on Mikel Obi, just outside their 18 yard box.

Nigeria could not utilize the resultant free kick as Moses’ kick was blocked into touch.

Nigeria’s brightest chance of the half, surprisingly, came the way of Eagles’ defender Kenneth Omeruo, who had a half chance inside the Ethiopians’ half, but his half volley went over the crossbar.

With few infringements and substitutions in the match, the centre referee ended the first half after the expiration of the one minute added time.

The second half started with both sides coming out to attack. Interestingly, the first real chance to score in the second stanza came the way of Omeruo, whose header from 12-yards out was way over the crossbar.

Nigeria’s desperation for goals began to show on the players as the players got three cautions within ten minutes through needless tackles by Godfrey Oboabona, Sunday Mbah and Fengor Ogude.

The Eagles got two goal scoring chances, in quick succession, in the 61st and 62nd minute through Emenike and Moses, respectively. In both cases, the Ethiopian goal keeper cleared the ball.
Both teams made their first substitution of the match, with coach Stephen Keshi bringing in Ahmed Musa to replace Ikechukwu Uche in the 66th minute, while Ethiopian coach Bishaw Sinet replaced Yusuf Saleh with Berhanu Bogale in the 68th minute.
With less than a quarter of the match remaining, Nigeria made their second substitution with Brown Ideye coming in for Emmanuel Emenike.
The substitutions inspired the Nigerian side as the two time champions increased their attack, though with some holes at their backline.
In the 78th minute, Nigeria were awarded a penalty after Moses was brought down by an Ethiopian defender in the box.
Moses took the resultant spot kick that beat the Ethiopian goalie to record Nigeria’s first goal of the match.
In less than a minute later, the Ethiopians almost got their equalizer but Nigerians had goal keeper Enyeama to thank as he parried the shot from Ethiopian striker into touch.

Nigeria’s Mikel and Ethiopia’s Alula Girma were cautioned in the 79th and 84th minute of the match.
When Nigerian fans inside the Royal Bafokeng Stadium were already calling for the Eagles kill the remaining time of the match, Nigeria got another penalty in the 86th minute, again through Moses who was brought down by the Ethiopian goalkeeper after he rounded him inside the box.

After about three minutes of delay after the referee sent off the Ethiopian keeper, Sisay Bancha, and was replaced in goal by a player because they had completed their maximum number of substitutes, Moses converted the penalty to record the second goal for Nigeria.

In the 94th minute, Ethiopia had a great chance to pull one goal back, but Kebebe fired over the Nigerian crossbar from close range.

After the seven minutes of injury time were exhausted, the centre referee ended the match with Victor Moses of Nigeria selected as Man of the Match.
Nigeria finished second in group C behind Burkina Faso who topped the group after they played a goal less draw with Zambia.. Nigeria will play the winner of Group D, Cote d’Ivoire in the quarter final.