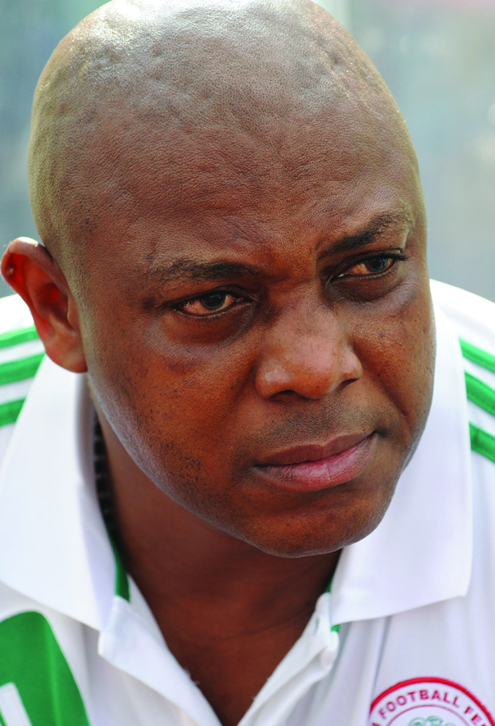 Barely 10 days ago (10 February, 2013), Nigeria returned to reckoning in continental football  with the victory of the national team, the Super Eagles, over  Burkina Faso to win the Africa Cup of Nations, AFCON, inside the National Stadium in Soweto, South Africa.

The triumph, achieved against all odds, was historical for the country; being the first time in 19 years that the Eagles would win the trophy and the third time they were doing so since Nigeria first took part in the continental soccer fiesta in 1963.

Though Coach Stephen Keshi might achieved unthinkable with the Eagles in South Africa, considering he won the trophy with a team that included 17 debutants and six home based players, but the task before the 51 year old soccer tactician is far beyond being the best on the continent of Africa.

According to the spokesman for the board of the Nigeria Football Federation, NFF, Emeka Inyama, while addressing the media recently, coach Keshi has been mandated with the tough task to guide the Eagles to at least the semi final of the Confederations Cup, which starts in Brazil on 15 June.

Inyama noted that winning the Confederations Cup or settling for a semi final berth will match the huge public expectations from the national team. Nigeria, who are taking part in the prestigious FIFA competition for the first time since their only participation in Saudi Arabia in 1995 when the tournament was known as the Intercontinental Cup (King Fahd Cup) and finished fourth, are pooled in Group B along Tahiti, Spain and Uruguay.

“Having emerged the winners of the Africa Cup of Nations and improved to 30th position on the FIFA rankings, we expect Keshi to guide the Eagles to victory or reach the semi final at the Confederations Cup. Our desire is to ensure that in June, Nigeria are fully prepared to overpower the likes of Spain, Uruguay and Tahiti in the same group and Brazil, Italy, Mexico and Japan who are in Group A,” Inyama, who is also the chairman of the Nigeria National League, NNL, said.

The Eagles will begin their participation at the eight-team tournament scheduled to hold in Brazil from 15-30 June against Oceania champions, Tahiti at the Estádio Mineirão Stadium on 17 June.

Three days after the first match, Nigeria will trade tackles with North American football giants, Uruguay in Salvador and on 23 June, 2013, the Eagles will have to be at their best when they confront World and European champions, Spain in Fortaleza.

The daunting task before Keshi is not only for him to ensure that the Eagles do well in the Confederations Cup in Brazil, a tournament exclusively reserved for all the champions of all the continents, but also, his employers, the NFF, and millions of football fans in Nigeria will be expecting him to deliver the 2014World Cup ticket for the country.

With the 2014 Mundial also billed to be hosted in Brazil, Nigerian fans are hoping that the Confederation Cup’s experience in the South American country would put the Eagles in good stead for the qualifiers.

For Nigeria to secure a ticket for the 2014 World Cup after their not too impressive showing in South Africa in 2010, they will have to survive the hurdle of making it through a tricky qualifying group that include Kenya, Namibia and Malawi.

The first post-Nations Cup test for coach Keshi will be against the Harambee Stars of Kenya on 23 March, at the at the U.J Esuene Stadium in Calabar, Cross River State.

Though the Eagles currently sit atop of Group F with four points, the team cannot afford any slip if they want to qualify for the next round of the qualifiers as they are closely followed by Namibia, Malawi and Kenya who have three, two and one points respectively.

With their current status as Africa champions, nothing but an outright victory is expected  from the Joseph Yobo captained Eagles by Nigerians not only to improve their placing in Group F but also to prove that their triumph in South Africa is not a fluke.

According to Inyama, the Eagles’ technical crew has submitted a programme for the match against Kenya by proposing a training camp for the home-based players before the arrival of the foreign contingent.

Under the programme, the home-based players will resume camping this weekend before they are joined by their foreign- based counterparts in Abuja few days before the match.

Another task before coach Keshi is the need to convince a lot of critics, home and abroad, that believe that Nigeria’s triumphant victory in South Africa was owing to the absence of Egypt and Cameroon. Some football pundits also are of  the opinion that the quality of play of most of the teams that participated at the 2013 AFCON in South Africa was below standard.

According to the Speaker of the House of Representatives, Aminu Tambuwal, while praising the Eagles for their achievement in South Africa, he urged the team not to rest on their oars, saying that there are still challenges tasks ahead of the team.

“As we bask in the euphoria of this victory, we must quickly remind ourselves that the task ahead is more daunting. We seek not merely to be African Champions because that much we have been twice before, but seek to be the greatest. Our goal, therefore, must be to overtake whatever achievements in this continental soccer competition attained by other nations,’’ he said.