Keshi banks on Emenike for Kenya 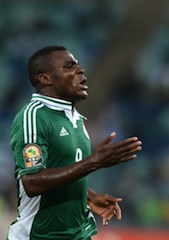 Stephen Keshi, the Head Coach of Nigeria’s Super Eagles, said on Thursday that he had not given up hope on the possibility of fielding striker Emmanuel Emenike against Kenya in their World Cup qualifier.

The Super Eagles will confront the Harambee Stars in a World Cup qualifying match in Calabar on March 23.

Emenike has yet to recover fully from a hamstring injury sustained during the Super Eagles’ 4-1 semi-final thumping of Mali at the AFCON tournament.

There are reports that the striker will be out for eight weeks but Keshi in a statement by Ben Alaiya, the Super Eagles’ Media Officer, said he would wait for the medics to give a final word.

He said reports of medics from both the national team and the Spartak Moscow FC of Russia would be the only reliable sources to know the true situation of Emenike’s injury.

Keshi pointed out that reports outside these areas could be exaggerated.

“Emenike is a very important component of our national team set-up and we have to be concerned if he is in form, injured or otherwise.

“That is why we are a bit concerned about reports that he will not be available for the game against Kenya.

“We can never give up about such an important player and we wish him the quickest of recoveries no matter what the medical team anywhere is saying,” Keshi was quoted as saying.

Keshi added that Emenike’s consistency was noteworthy even though he had several other options for him in the team.

He hoped that the striker would recover in time for the match.